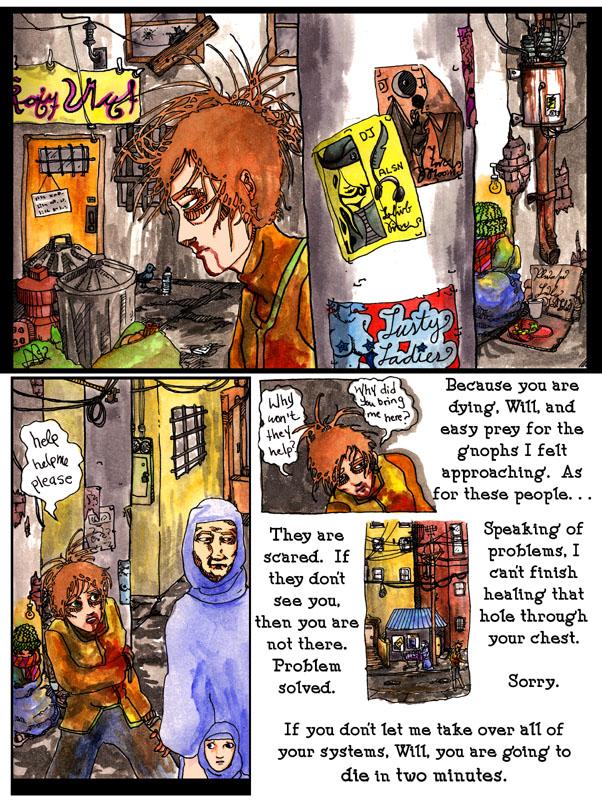 Yeah, see, pages like this are why things are going more slowly. And yet most of the details go rather subsumed when I shrink down the image to 800 pixels high. . .

I've started thinking differently about cities. I've started treating them as if they were forests. I came to this decision when I moved into my current apartment, which is on the edge of some questionable districts. See, cities are NOT full of straight lines - everything sags, or leans, or scrabbles across and in front of something else. Just like a forest! So now I have a lot more fun drawing urban landscapes.

Oh, yeah, and Will's going to die in about two more pages.

Lol, I noticed the Two Moons poster too! That's pretty sad news for Will though.

well he did get shot in the chest, i guess it's only fair :(

That was a joke about Will dying... right?

The layout's great on this page :D Colours are bold and wacky too...great in every respect!

Ashlee: Really? Fun! I'm going to have to do more of these references for my own, and others', amusement. Jenshin: Random (alley crap) is God! iago da jester: I think that's more my style shifting than a purposeful transformation of Will's hair. The hand-written text, when it isn't English, is actually just English written using the German alphabet. Bet you thought German didn't have its own alphabet. . . three years of German in HS had to be good for something, yo!

And don't scare me about Will, yo!

I like how WIll's hair gets more gnophish with each passing page. This one is just wild! That power box looks like a fire hazard and that woman SO looks like Will's old mum. The writing is wicked too. Do you have a whole alphabet made up or does it come to you in fits of inspiration? And those posters... MUA HA HA HA HA... ha... ha... I wonder what music she ~would~ mix up. Huh. I'm thinking we've got ourselves some Russian/ Finnish techno remixes from Two Moons and something between Ani Difranco and Pink Floyd from Fated Feathers. Dude... ejb's right. These people are friggin' nutzoz! Your words in the description of your jungle cities reminds me of something Geothe once said... damn, now I have to find that quote.

Love all the colors on this page. This is really detailed and well done! I like all the random crap about the alley. Heh, and FF and TM get posters - Yay!

You know, I actually have a really teeny tiny 'Gnoph' holla' in Dillon. You know that talisman thing on Tao's (the guy trying to kill Dillon) forehead.

Well I'd let the Gnoph take over, but that's just me.

The "Lusty Lady" is in Seattle, directly across from the Seattle Museum of Art. As for the club scene. . . you guys appear to have noticed what wild DJs infest the place! I'm starting to have fun with little jokes like that. Hope you don't mind, ladies, when you see this page.

(Correction! I meant the first panel. Oh, and the hobo's a good touch, too!)

I love how the rust looks on that power-ma-bob in the second panel. And does that poster point out Two Moons? Looks like it. (Poor, poor William.)

I love that cityscape. It's organic and lived in. The city can't stay cold, angular, and sterile so long as it's got a human infestation. In other news: I bet this place's got some crazy music, what with the dj selection and all.