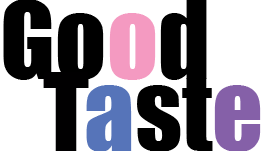 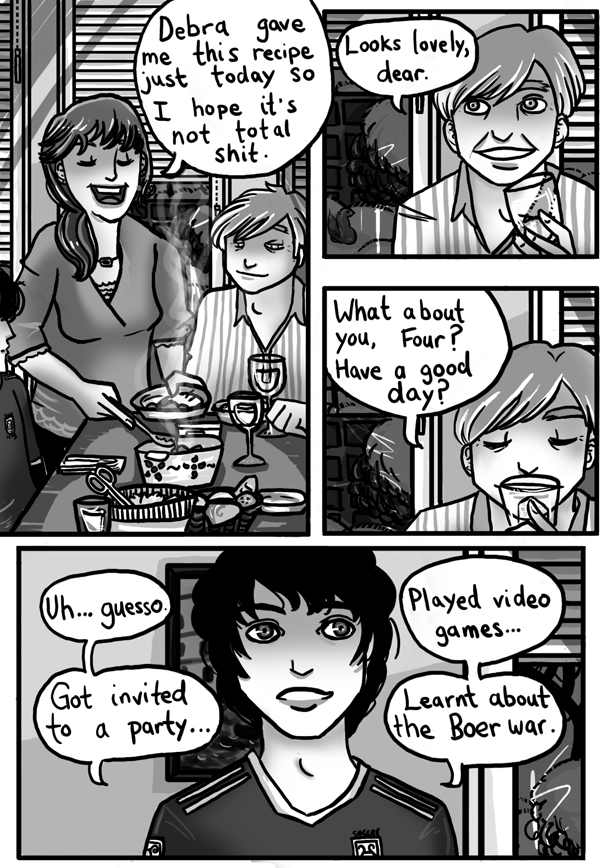 I'm so bad at drawing Four consistently. He looks different all the time. OH WELL. I'm pleased with how his parents came out.

I'm still in shock over the being featured thing. Can't believe it! Comics are pretty much my life so this is a HUGE, huge honour for me. So just thanks thanks again. I know I keep saying it, but really. I am, like, the happiest I've been in forevers. And thanks so much for all the congratulations. I hope everyone sticks around. I'd love to get to know you all.

Also! You may have noticed I have a new top banner and buttons, thanks to Skullbie of the wonderful comic, Plastic. I'm so grateful! Looks so swanky.

Emily_Elizabeth: I do, indeed, use a tablet. I first draw the picture out on paper, and then scan, and then digitally ink.

Next update: I HOPE to update before Saturday. If not, definitely Sunday.

You're very welcome. Also, sorry for making a fool on a later page... didn't realise you can't vote twice and embarrased myself xD Still trying to get used to DD. Hehe :)

@LittleSwan: Not sure who that was, looked up some pictures, went oh my!! Thanks for the compliment!

He looks a little like Noel Fielding... or is that just me? Looks great though, you're a talented artist ^^

@avie: The key for me, anyway, is to change location as much as possible (without it disrupting things, I suppose) so that I get excited about drawing new backgrounds all the time. Also, I try to have the background tell as much as it can about what's going on, so it's part of the story now. @Derkomai: Oh-ho, maybe! ;D He is a pretty boy. @llawliet11: I like L too! Nice icon. @riggseryan: I feel that way about my cooking ALL the time, not just sometimes. Ha.

You mean you can't seem to stop making Four even sexier every new time you draw him? Eheheh. Very pretty page, everything here is pretty.

I can't get over how detailed the backgrounds are *is jealous* Keep it up !

Thanks guys!! I think I'll do replies in the comments now. I think I tend to forget things if I wait until I have a page to post. @Ulrika, @Skullbie: It's kinda funny cos the heat thing on the food was very last minute "oh!" @Sei: Four is a replacement for a name that Four does not like. His mother is the only one who calls him his real name. @Fly_Hue: Not digging for compliments so much as REALLY FREAKIN' NERVOUS that suddenly I'll be crap and no one will like the comic, ha ha!

This page is exceptional :) Love the window shadows and steam from the food!

Pffft, I think it's because there are so many blinds on this page, so I have the shift key in Photoshop to thank for the crispness! @Emily Elizabeth, you definitely should get one! I really like mine.

You really pulled off that 'normal' look on this page. Hee. Someone is digging for complements.

WOW!!!!!! For some reason, it looks like even more amazing than usual..... everything's so clear and crisp and pretty! Not like it's not in the other strips, but today's is just striking.

Total congrats about the feature!!! I was considering getting a tablet so I'm asking all the good artists here on DD to see if they have one! XD

I love how the mother is totally nonchalant about saying shit whilst serving dinner to her family. LOL! I can already tell how loving and tight these guys are heh. Four- what an awesome name! Short for anything?

At first I thought those were scissors in the salad... then I remembered what salad tongs looked like.

Now that looks more like a "normal" family. :) Congrats again on the feature!

Congrats on being featured.:) You deserved it! I love the details plus you made a great effect on the first panel-the food look like it's really hot. And I guess thanks to it I'm just getting hungry.. ;)

congrats on the fav, it's why i'm here