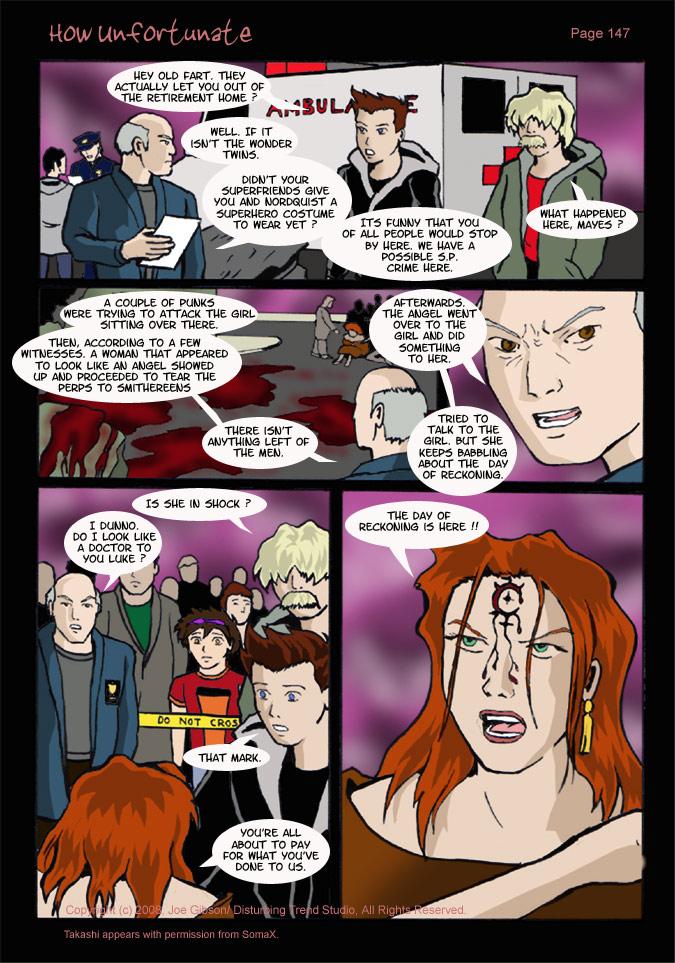 Hi Drunk Duckers. Here's the newest page ready to be viewed by the masses. View away.

I've decided to use a scientific approach to picking the next cameo appearences. Sooooooo, this time the dart landed on SomaX's name. And todays cameo is from Takashi from MOSAIC. Please check it out.

In this page, We meet Detective Warren Mayes, whom our heroes affectionately call The Old Fart. According to Old Fart, a couple of thugs were killed by what appeared to be an angel. It would seem that Lucinda/Rihanna is already causing trouble.

See you later for the next update as the chaos is only starting in this story. Later. And thanks for reading HU.

Thanks for the comments and high fives everyone. [b]DAJB[/b]- People babbling about days of reckoning never do. :) [b]Peipei[/b]- That's the $10,000 question. [b]lapaix[/b]- Thanks. ^_^ [b]amanda[/b]- Damn soothsayers. [b]spiritmonkey[/b]- Thanks. [b]Shady One[/b]- God only knows. It could range from us all being sinners to wiping out the humpback whales to American kids obsession with High School Musical. I personally believe its Britney Spears' fault [b]Stig Hemmer[/b]- I reckon that deserves a thank you. [b]xanos[/b]- Thanks. Well, they don't know all of the cops. Mainly those from the stations they worked. [b]Vakanai[/b]- LOL. I think you'd be a wonderful cop. Just as long as you stayed away from soothsayers. [b]John the guard[/b]- Thanks man. :) I should have the next page done by tomorrow. I'll see ya' then.

Forgot to rate it.

cool, love the "old fart" its a wonder they don't know all of those cops, being some themselves XD great page, I really think that mark is interesting ^.=.^

The Day of Reckoning is here!! I reckon this comic deserves a five.

ah man... what did we do to deserve anihilation this time?

Oh man - never a good thing when people start talking about the day of reckoning.

Not good at all o.o What is she gonna do?