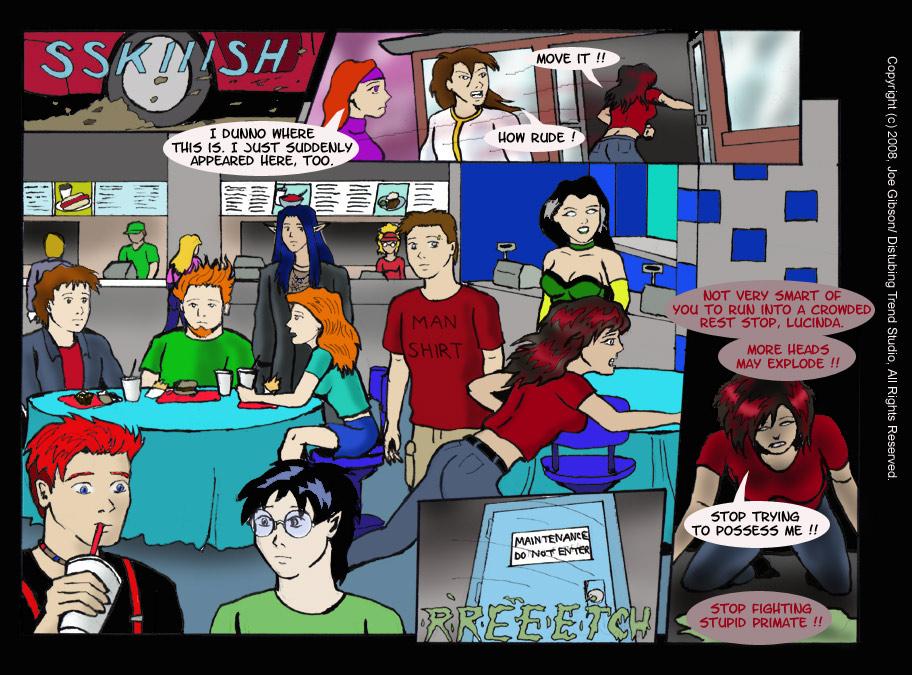 Hey Duckies. Here's the newest page for ya'. Hope that you like. Sorry its a little late. My weekend was a little busy.

We have plenty of cameos on this page as Rihanna's power is displacing more people. In the second panel on the top right. We have Daryl from Jimeth's Epic Adventures, and Uriah from Janen's Per Ardua. In the big panel. We have Ezra from Mister Kent's Blood Groove, Jake from Desiree Dee's Unknown, Deme from NPC_Girl's NPC, Brio from amanda's comic Salt The Holly, Ultra Girl from legacyhero's Hero Force, And the three sitting at the table are Kevin, Brad, and MC Creedy from a new webcomic I'm starting in late June called Hitting Rock Bottom With the Creedys.

I'll see you later. I'm ready for some sleep.

[b]DAJB[/b]- Cripes!! Looks like Ultra Girl has become a common name round these parts. Now if we could arrange an Ultra Girl Fightsplosion... [b]Mister Kent[/b]- Thanks for the high five. Yay for DD Multiverse!! [b]Jimeth[/b]- No sweat. And get to updating. Epic Adventures' a funny comic.

Yay! And Daryl got a speaking part! Thanks! Thinking about it, I really need to give the comic some attention. I haven't updated for weeks >.>

High five! The DD Multiverse is alive and well

Ultra Girl? Wait - this is a [i]different[/i] Ultra Girl from the one in [url=http://www.drunkduck.com/Rival_Angels]Rival Angels[/url], right? Damn - I think I've slipped into a DD multiverse!

[b]Dekay[/b]- Mmmmmaybe. [b]spiritmonkey[/b]- Thanks for the correction. ;) Other appropriate words are KABLOOEY, SPLURT, SPLODIN' (see dragonrider's comment), or POP LIKE A HUGE ZIT. [b]Peipei[/b]- Thanks. Luci should've picked a better place to upchuck than a closet. Maybe Arby's. XD [b]amanda[/b]- I agree. There are just some things that you shouldn't do in public. Glad ya' liked Brio's cameo. ^_^ [b]dragonrider[/b]- And what better place to do ASPLODIN' than at the rest stop? Thanks for the comments and high fives. And thanks for reading. :D

You gots lotta Splodin to do here lucy