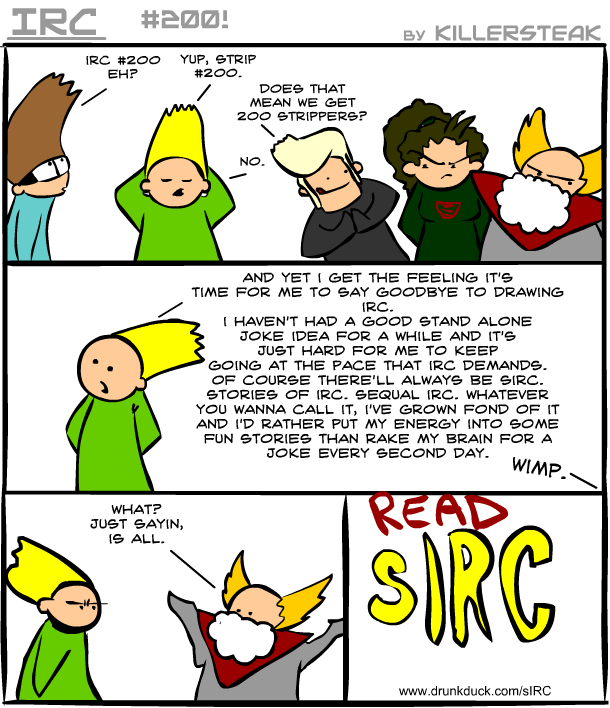 So if you want your fix of IRC read sIRC! (though it hasn't updated today…) >.>;

I may still put up any stray guest comics that people send me. I'm guessing that won't equal a regular update schedule though.

Also Jebus expressed interest in taking over IRC. If you're reading this Will, make Jebus an assistant.

No way Jebus would delete his own comics... is Will ruling from on high?

well. that was rather childish... :P *referring to the last few comics disappearing in a whiny huff.*

update in 30 minutes. Connection issues with the duck today

Update shoe. Hey I can 5 my own strip now!

What about a flash animation? Typically I'll only go to beating up simon for a quick gag. I've got a few upcoming strips based around Fyrehyde though

Jebus isn't allowed to make more than 5 comics in a row about him beating up simon... too much and the joke may get boring. just keep that in mind man

NOW BEGINS MY REIGN OF TERROR And strippers.

I give that look to you often FyreHyde. You're just too unibrowed to notice.

Put me in it sometimes, there's your standalone joke. Lazy bum.

That's a scary look Kaze is giving me.

ok, yeah you prolly guessed, i havent really just dissappeared off the face of the Earth... i hit the same snag steak has has today, coupled with the depression of the reality that not many of my comics were funny. just writing about the goings on in the chatroom was quite limited, i am really surprised it made it this far... i made the decision to stop making comics for IRC sometime in september, before that i was planning to make comics, but no ideas came by... so yeah... IRC has pretty much become completely tapped of natural recourses, only to become a warfield for IRC regs to make fun of each other. i havent come in the chatroom because, really, i've just been to scared to let you guys down and say this, steak just doing it first made me a little more comfortable. if it was a possibility to turn over ownership of a comic to someone else, steak would own it completely and would have for months now, since that isn't possible i just decided to keep quiet. im really sorry, but i wont be updating it anymore either (not like thats new) Jebus? assistant? i hate his fucking guts! everyone does! what in Gods name makes you think i would do that!?!? ... ...i'll do that now... but, just to clarify, im still interested in the duck, i am working on the storyline of infinity all the time and plan to work on it during these next holidays. however, i also love the "crap and quickly drawn shit" genre, which is easy to update and pleases everyone, so i plan to make a new comic that has nothing to do with IRC, just random and funny shit i think up and want to make a comic of... i think ill call it "nIRC" for "not IRC" or "Nothing to do with IRC" just to keep that shit rollin'. so, dont forget me, as soon as i find my muse ill be right back, exams are next week, so wish me luck! (jebus, you better not fuck around with this comic, i know where you live and WILL stab you in the anus if anything happens besides updates :P) love yas all!

I want the strip. Will, make it happen.

What it all boils down to, peeps, is that todays monumental 200th comic is a "cleverly" disguised plug for sIRC... I'm not chastising Steak for it though. He's my kind of weasel.