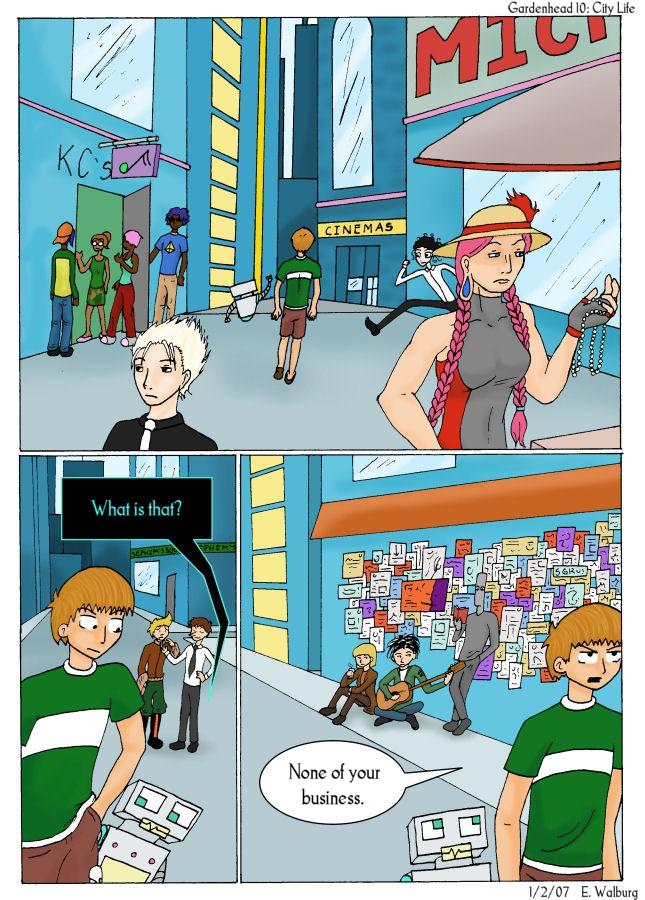 A quick sorry to say this took waaaaay too long to get up and I'm out the door. I wasn't able to upload this last night for some reason so I'm doing it around 6:30 am before I run off to school. I'll come back later to do the author's notes tonight.

First off, another sorry about the long, long wait. I sort of psyched myself out on doing this page and became terrified of actually doing it. I guess I didn't want to mess up anyone's characters or anything.

I actually spent most of my time last night adding in those stupid posters and coloring this. It was finished, but something's wrong with my computer again and shuts off the internet browser whenever I try to upload an image either here on Drunkduck or over on DeviantArt. I also had a pretty awful day yesterday, so just working soley on something I enjoyed was a nice way to let off some steam. That, and swimming. But I'm digressing.

See if you can pick out all the cameos of characters from comics I read! Ozone has pretty much named most of them off, although he's forgotten three of them! And by the way, Ozone, go right ahead and put this on your fanart page! I have no problem with it.

In other news, I had a pretty good Christmas. It was a green Christmas, which was a bummer, but I got to see both sides of the family which was nice. The New Year's part I went to wasn't as great as last year, but it was still pretty fun. Overall I had a really fantastic break, albeit it was extremely short this year (only 6 school days off). I had to go back to school yesterday (maybe that's why I had such a bad day?) and I'm hoping I'll be able to drop my spanish class at semester. It's a waste of time and there are a lot of other classes that'll better prepare me for Washington.

That's about it. Thanks for all the comments, guys, and enjoy the comic!

Hey, I know those guys!

Hey!!!!!!!!!!! Hahaha I recognise some people in there! WIntergreen characters, Siilas from Twomoons, the dudes from TEO as well, Annnnnnnnnnnnnnnnnd: Pinky in her desert gear! ^_^ That is too cool! Can I stick this in my fan-art gallery? Either way, you're totally getting a big fat image link on Pinky TA when I update ^_^ -I dunno the other two... What is he doing with his hand in his pocket?