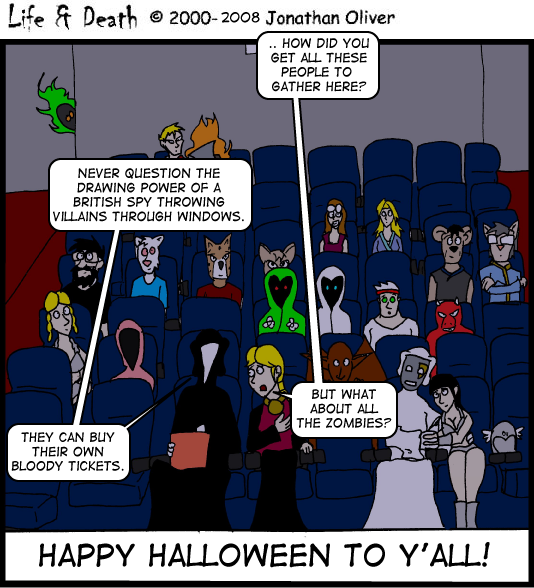 Today's the release of the Bond film here in Britain… That's enough to call a temporary ceasefire against the undead :)

So this here's my last part of this year's Caper
http://halloween2008.dragoneers.com/
I really wish I'd had more time to get involved.. Ah well, next year :)

Happy Halloween and such to you all.

Alexis from The Insanity of Xade is probably annoyed that Steve's STILL talking loudly during a film:
http://www.drunkduck.com/Insanity_of_Xade/index.php

Baby, Chill, Wander and Little Alfred seem a little bemused by this quaint culture thing of the cinema… Maybe they don't have cinemas on Terra:
http://www.drunkduck.com/Magical_Misfits/

Fes and Ernst are here from P.S.I, enjoying a Bond film, as all people should:
http://psiwebcomic.com/

Caths and Ben from Meiosis, with Ben unfortunatly stuck behind a pretty tall woman in a cinema… I hate it when that happens:
http://meiosis.comicgenesis.com/hc1.html

Little Thing from Prismatic Vodka seems to be enjoying himself:
http://www.drunkenscribblings.co.uk/

Toshubi and Advisor Toh are also vaguely bemused by the talking wall… Though in all honesty, Toh's probably thinking to himself that Bond's an amateur and HE'D have killed twice as many goons by now:
http://www.drunkduck.com/Blade_of_Toshubi/

Lia and Daisy from Salt The Holly are happy to relax a little in the midst of a zombie attack:
http://www.drunkduck.com/Salt_The_Holly/index.php

And lastly, I think it's the law that I have to include Hogan here in the Cameo Caper.. Because it messes with his system so very nicely :)

I think it would be cool to watch all the Bond films in 'order' starting with Casino Royal, then moving to the older ones. That could be fun.

yay Alexis made it! wish i didnt have to drop out but when nature intervenes....

Ah, now we know why this years caper was at a British Mall.

Where is the wizardy hat??? i havent seen it in AGES

way to fill the seats :)

Happy Halloween Joff, and thanks for playing along again :) Great cast line-up, especially in the front row... aaaaaaaaaaw :)

Just the break everybody needs!

crap. i didnt know that was coming out this soon.....

I spy with my little eye... CHAOS!

Happy Halloween to you too. Thanks for all the fun.

Happy Halloween to you as well! The ticket price for zombies should be higher - after all, you know they aren't going to be interested in buying popcorn, and they'll probably ruin the watching experience for everyone by murmuring about delicious, spicy brains throughout the entire flick. I love Lia's expression ^.^ Nice cast picture!