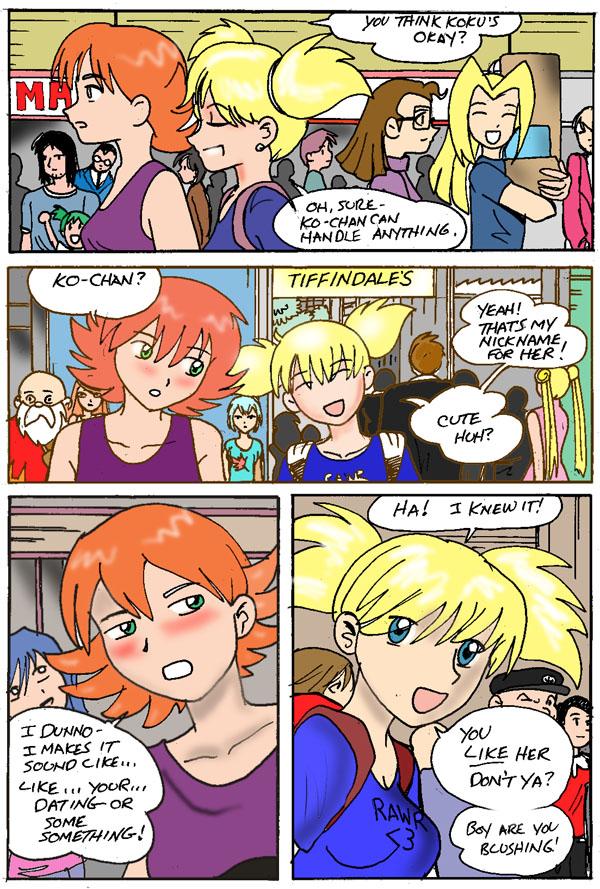 Meanwhile, a few blocks waya, Penny and Vicky left to fend for themselves, find themselves surrounded by a few familiar faces! And Vicky's secret crush is revealed! (I'd tried to hint at it earlier but i don't think anyone caught it!) Of Penny is astute enough to figure it out! Again, this is something I hadn't planned, but it kept popping up when I considered Vicky and who she is. So..there you have it..another sub-plot into the mix!

it looks like magical misfits is in there too, check the avatar down below.

omg! lol! didn't even notice that

Hey look, it's Yotsuba and her dad! 8D

*bows head in shame of not recognizing more*

magical you missed edwyn, but koku was sure to point that out! thanks for including them...

New Girl!! New girl is up there too! How did you miss it Hogan!

Must admit I only caught Wheels Ironkeel out of the bunch :P And the "secret" is out ;)

Anything but Life: That's Vick..she's a girl! O_O Anechan: There's Yotsuba and her father, Newgirl and Edwin, Clark Kent, Rei from Evangelion as well. :)

What an unexpected twist! o.O I can't believe I didn't catch on. I guess I need to reread some things. xD Lol. Out of the familiar faces, I can only recognize some. Sailor Moon, Pop-eye and Oliveoil, I see the characters from Magical Misfits. xD That's about it. Very nice.

wait...is that orange head a dude or a dudette?