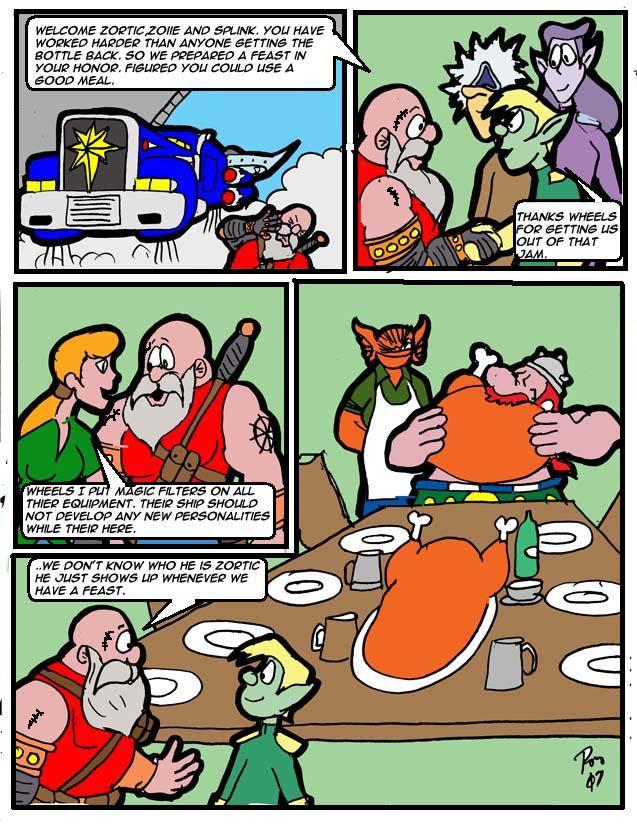 Late Late Late. I was busy with Dad's Taxi service! Teenage kids don't you know. The rotund fellow sitting at the table is the Menhir deliveryman Obelix. Although you can find the books he stars in here in the US it is a European Comic. It has been translated into a gazillion different languages English and US english I think since I have seen at least two fonts lettering. I have read them in German and seen them in French and Spanish. The Books are Asterix! Next time your in a better book store you will find them in all sorts of sections such as Graphic novels and Children's. I found them in the magazine section once! I love the art and the stories.
Zortic
WCA_hunt
Tales_from_the_Institute

I read a few Asterix comics years ago, loved them but barely got around to looking for more. Obelix was my favourite character. :) You know, when I did find a few Asterix strips, not only was the font different but also the names of several characters. I can understand why they changed the druid's name, it was Getafix! ;) I was a bit disappointed they changed the chief's name though, I liked that they all had to protect Vitalstatistix. :)

I never was a big fan of the Asterix and Obelix books ( yes, we had them in Dutch too) myself, but even I know you can't keep him away when roast warthog on the menu

I was wondering, “Who’s the red beard?” (No one in preceding panels had red hair.) Cookie seems happy, but “We don’t know who he is, Zortic, he just shows up when we have a feast,” seems like poor security. He does seem to have an appetite, but if he eats only when there’s a feast then he likely goes a while between meals, thus the big appetite. Guess I should make a trip to the library…

Not Hagar Xade Obelix from Asterix...a french comic about the Gauls...Obelix is a great little cameo...and they did some animated english cartoon movies lol

Awesome job, even if it was late. Asterix is one I don't think I've heard of, although it does sound familiar.

This reminds me of my own family. We punctuate any event, good or bad, with a big meal.

You'll always find me at a feast. Good job as usual.

I like showing up whenever there's a feast, too!

OMG Asterex! I read that as a kid in Germany! I looked for when I passed through as an adult but had a hard time finding it. I thought only us military brats knew about him!

woops, my bad, i was in a hurry he looked kinda viking and Hagar kinda resembles him. Course its been a very long time since I actually read hagar or Obelix sorry bout the conclusion, You only had late late on when I saw it.

yay! obelix and asterix were totally THE awesome

Yay! Obelix! (I grew up on Asterix and Obelix... one of the joys of being European ^_--) Also, Gogo wins over at Zortic today!

first!!! Hagar the horrible, cute cameo. I got a chuckle