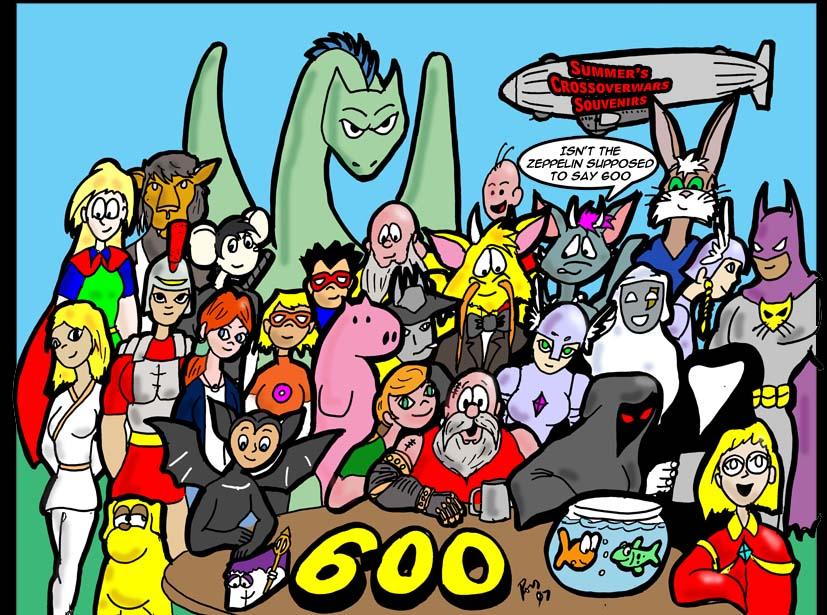 It seemed like only yesterday you started Magical Misfits. 600 pages...

*Waves to everyone from the left side of page*

CONGRATS!!! thanks for including NewGirl! :P

600 summer will be saleing "happy 600" shirts in the lobby...after the party.. a "small" portion of the sales will go to finding homes for homeless EOU droids..we also have a few cross over wars shirts left..

Happy 600! Nice spin on "Packet Isis" there. The comic has been great and hopefully the 601-700 block will be even better. Thanks for the cameo!

There were a few EOU droids that became good, weren't there? Where did they... excuse me, I think I'm sitting on something. Um, oops, er, sorry about that...

Congrats! That rabbit in the back row is my Alex. I like how you did him. :) I'm definitely going to have to try to draw his ears like that. That's one part of him im not too happy with. *looks again* decided that he's wearing his hair short so no one yanks it? *notices another cameo* I'll be sure to msn BlkKnight and tell him about Isis in packet form on the table.

I forgive your explicit use of cameos and wants to congratulate you on 600 great strips! Here's to 600 more! :)

What, no EOU droids? Congrats on making 600!

Hehe, wicked cool page! I love your take on Koku! :)