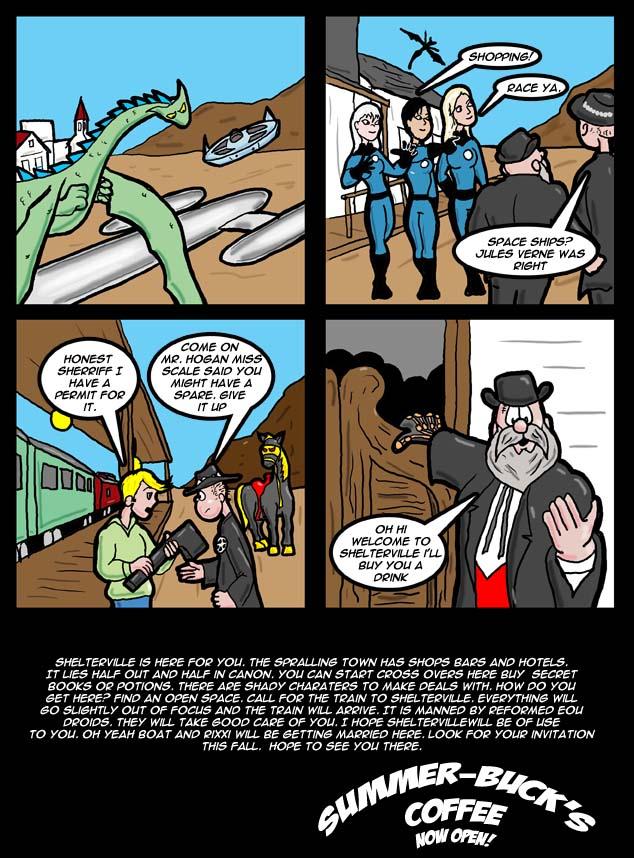 Here ends my part of the Shelterville story. I hope you all come and visit.

Hehehe... don't be surprised if The Fat Lute (Keina's tavern/inn) has a portal in that town soon... :)

Feel lucky you weren't TGed again, Wander. I'd be surprised if there wasn't SOMEONE bringing a TFG or something like that along...

The all important question: How many bars and brothels does it have? :) Wander/Destrey G. "Hey, just because I'm a kept man now, doesn't mean I can't LOOK at the menu, right? Right, Gogo? Right....babe?....er....eep!" ~Wander, seconds before being frozen solid again, by Gogo

*packs up for a vacation* Spring Break's comming, ye ken.

I think Danielle will take a vacation in Shelterville some day. It looks like a fun town.

Trust Steve to be in another time period when such a great offer is laid out (Make it limited time only Wheels. For your own safety!)

LOL great idea! :D problem is if I showed up as Xade cannon I'd probably have to have him check my fur, its metallic and can be rather spiky on command thanks to a sudden chemical dip the original owner of the body had in his chip-fox form. (very complicated, once i can get my hard drive up and running and everything restored then I can get back to work and reveal it)

Considering Tink's comic, I'm quite sure he and his characters are adept in handling none-human liquors :P

Careful. If this is a meeting place for everyone, there might be stuff up there that isn't fit for human consumption...

Not axes in general, Hogan. Just your axes in particular... *grin*

*hrmps* In a town from a world and time where people wear firearms and they have AXE-restrictions! *hrmps* Show me the bar...

oh yeah. i'll be there with bells on