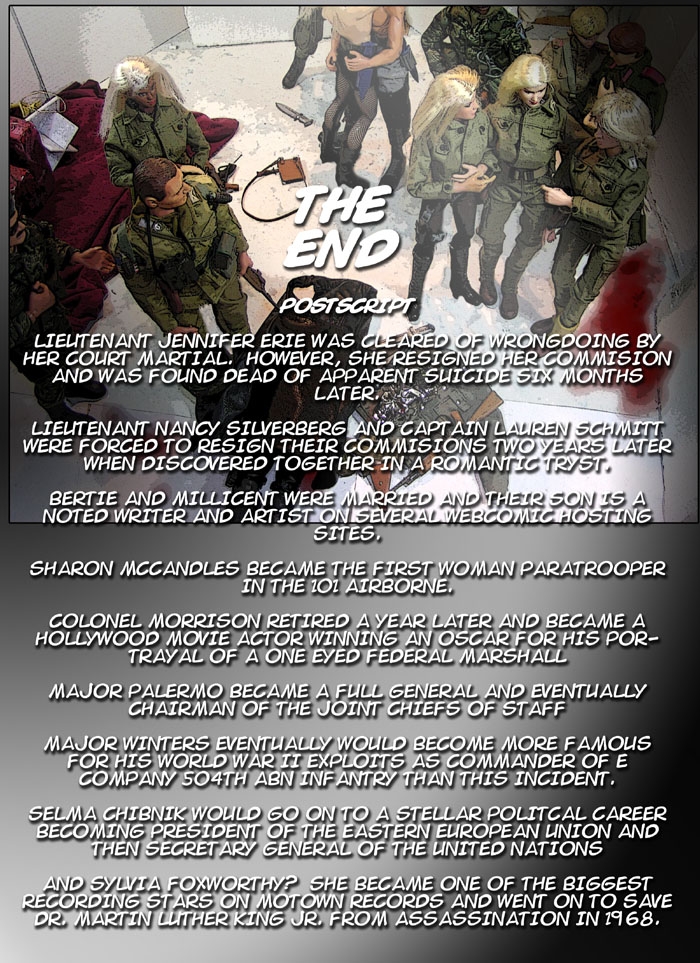 The postscript page.  It was the original end page until I realized I forgot a bit and that the postscript was just a bunch of stupid jokes.
About the first one: I imagine Jennifer falling apart while haunted by her memories and feeling lost. She never did return. In her desperation she mixes alcohol and sleeping pills.
The second one: it is hinted that there was some experimentation once upon a time. It is hinted that love breaks the brainwashing (not just sex) Lauren's brainwashing was actually broken by her love for Nancy. This was part of the first draft of the story but later amended to the one remark.

Thought I'd be reading over the weekend...HAH! I binged read this all afternoon! Thanks for alerting me this comic was here, Bravo. its awesome work

In Belle's career this was a cable TV miniseries she did in the early 2000s around the time Spartacus was running. The point was to show that even though now over 35 she could still do it.

Never thought that mention on the For your Consideration for Battle of the Robofemoids would get his one nominated! Woo-hoo!

Well done for finishing yet another comic! I really like the post script, despite one demise there. :D

The Duke got an Oscar.

Aw, so not a happy ending for everybody, it looks like!

Eh? I'm sure I read this yesterday but somehow I had to read about four pages... time keeps slipping away.

Some of the reason why I don't do a follow up with the gals doing a replay of their slumber party is in here. The comic would end with Jenn's suicide and personally I just don't want to write that one out. Though the original slumber party is intriguing. How adult can I go with the figures?

Yup. That's what I get for going so far into the future

I think you may have set the date wrong...