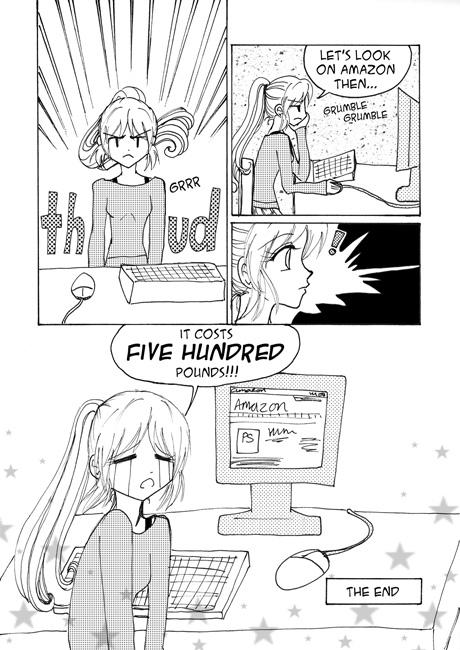 Haha! So everyone's had Photoshop trouble? Me, I bought Photoshop Elements instead. So much cheaper and still good! I love my PS Elements… :luv:

So here is Sandy's response to the outrageous price tag :) The price was an average of what it costs.. it was correct when I checked Amazon. And its in pounds, I'm sorry… Britishness :P

Her mum's response? Hee hee, when I read that I just had to draw it out. It's rough.. but I might put it up anyway. Or, i'll draw a more polished one! Hmm…~

Thanks for the comments! Tis wonderful! ^^

Last time i checked, it was $400+ dollars, which is CRAZY! My BF got her's from a russian freind, who even made up one of those cd-codes. LUCKY! And ooo, PS Elements? I should look into that.

I can't beleive I forgot about this comic! =( Man, it's still ownage! Good work! =D

aw what a cute comic. You have a very clear and crisp line art style, and the colour page looked very manga style professional. Good job :)

I know the feeling ^-^ I somehow got lucky... can't remember how I got mine but yeah :D such a good program but so expensive! :(

I must say, this is a very cute comic x] I'm gonna fav it so I can see where it's going =D

Strange. I have photoshop and I don't like it... never have liked it either... so I use something else instead. Which sounds less professional but works miles better for me.

My dad managed to get photoshop for free at his work, so I have it :3 But I have no idea how to properly use it D:

aaah... Britishness, where would we be without it? =3 lol that was my reaction to...I dont understand it, artists are the ones that use photoshop, yet theres no way any artist could ever afford something that expensive! XD

lol, I also have photoshop elements. So much cheaper xD

it is really too much money for one program....

I don't know how much that is in American. :(

I have paintshop myself, not as good as photoshop but it still gets the job done :D