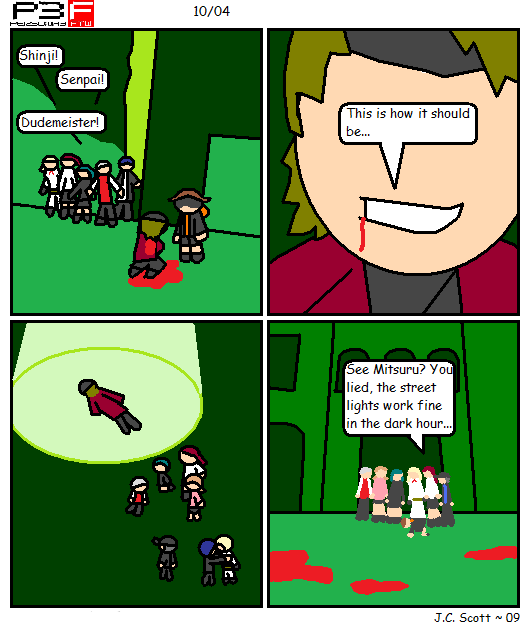 Ok, lotta stuff I wanna talk about for this comic. A. putting the word “Dudemeister” into this moment turns a horrible tragedy into a joke…a bigger joke. B. I don't wanna hear anyone talk about the shape and anatomy of Shinji's head in the second panel. I did my best damn it! C. Again, added joke, the MC and Aigis are supposed to be making out in the third panel. D. The street lights ARE clearly working in the game, but that could be a dark hour thing, I don't know, the game is pretty vague on how certain things work in the dark hour. and lastly E. As you may notice, there are no outlines in the final panel, was the best way I could fit a lot of characters into a tiny space. (again, I like to actually model the comics on the actual ingame cutscenes) This “art style” I think looks pretty good, but don't expect to see a lot of it. I am proud of it though, it looks neat. That is all.

The art in the last panel looks great, I thought they didn't have the outlines because they were being lit up by the street light, which goes well with the joke.

They all probably hated Shinjiro... secretly, including Koromaru. Wait, where is he anyway?

Silly... Mitsuru!? She called herself a liar XD

Actually Greed, funny you mention that. The original ending was Junpei going "Dia? Recarm? Anyone...No? We not gonna do that?" But I know the difference in RPG's between dead and KO'd, and I figured if I went with that then someone would have called me on it. It does beg the question why they didn't try to heal him BEFORE he died.

oh, and shinji was gonna die anyways...cause of the pills... but he wanted to go out a hero

i always figured shinji and ken were not wearing their armor like ken wanted to die...kinda

Why can't they just heal him? It's almost like Aerith in FF7.

I think this was like the best artworks you've ever done. Kudos, man!

It does look great! Remind me of classic video games...

maybe small luminescant plants grow on the lights during the dark hour to make it brighter?

A: I don't know what a "Dudemeister" is. B: I think it's awesome. C: Very funny Strain. D: The dark hour defies physics. So the light could be frozen in time, though if that's the case, then the team wouldn't be able to see anything. (no light reflection) E: It's ok. Your comic is Great. Yay, I'm the 1st to make a comment on these full moon boss comic!!!