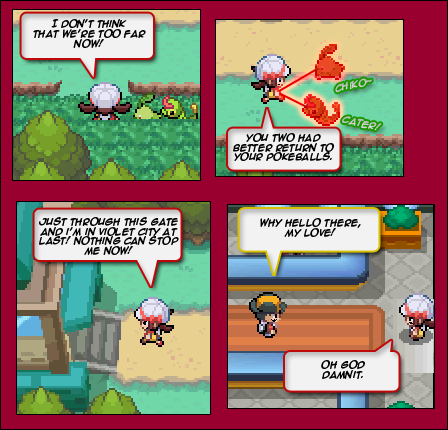 I dont care if a certain “godly” pokemon comic is going around telling people they can't be fans of this comic.

I like my comic, so yes, i'm going to still update.

oke... i did read the comments and in my eyes this has happened but oke can we please stop this? cause this is giving me a headache

What? How could it have been "a different way than it happened"? I never sent him (or anyone else for that matter) any messages, thus that means it never happened. He's fucking lying to you.

yes, it did happen |: just not the way it seemed to have happened

this comic is one of my top faves

... Did you even read the comments at all? This whole thing was fake, it never happened.

sigh... i agree with squishyninja this comic is great. and nobody has the right to say that you cannot be fans of it. cause i am a great fan of this comic. dot and over!

[quote=spiknot6SIC6]He's comic sucks ass.[/quote] Reasons? If you're going to say you're better than someone, back it up with proof. And since people don't realize it, "clichÃ©" and "you don't update" aren't valid arguments. Neither applied to me 2-5 years ago. [quote=spiknot6SIC6]So bad in fact, it baffles me how he gets so much fucking guest comics.[/quote] Because I have a ginormous fanbase who disagree with your earlier claim, perhaps. There's also the fact that people make them so I can help them out in one-way-or-another. I'm rather well adapt in writing tutorials for various reasons. (For example, in your case, [i]I could instruction you on how to stop being a faggot who uses an emulator, and how to buy a fucking flash card.[/i]) [quote=Devvy]kevin is a dick so idiots dont waste space on this site.[/quote] Actually it's so people can improve, but I digress.

and stfu slipknot, you stole xaxelx's neku sprites to make your sprite. jesus, the audacity of some people.

you know, kevin is a dick so idiots dont waste space on this site. i think this comic is pretty good, but it could definately use work.

why is kevin such a dick? He's comic sucks ass. So bad in fact, it baffles me how he gets so much fucking guest comics. Just ignore this prick

Trust me man, Kevin's an asshole, he'd be up in your face about it, he wouldn't go around saying it behind your back, I believe him on this. :T

also I trust this guy with my life, so that's why i was so quick to jump on it |:

if i was trying to get attention, I would have used your name. |: as you can see, i never mentioned you once in comics. the person that told me of this was http://user.drunkduck.com/KisiroKitsune in which he pasted the comment to me in msn I=

Hmm, ccb already beat me to everything so I guess I'm inafteretc.

In my defense, I have no fucking clue what you're talking about. Someone is clearly making shit up. The logical proof of this is that I have never once been a faggot when it came to making fun of people. I'm right out there pointing at them telling them how they suck (Like so, this sucks because the text bubbles are atrocious. The text isn't centered at all, the text is too big for the bubbles you use and - this is a personal preference as a typesetter I guess, but none the less a valid one - who even uses color coded text bubbles/text nowadays? Is there really a reason?), so why would I go behind your back and send messages to people? Having said that, I don't even use the PQ system for anything except replies in the first place. IIRC, I've only ever sent two PQs out myself. One at some dead guy to see if he'd respond :T (He didn't.) The other at one of the voice actors for the comic you mentioned is a horrible, original piece of shit in your PQ. Who I'm still waiting to send me the records, but I digress. So... who exactly is telling you I'm doing this? Was it more than one person? Did they even prove it? Unless I got hacked (which is possible, even though my password is really long (consisting of upper and lower case characters, as well as symbols and such) and I haven't been logged out of Drunkduck in awhile), I'm pretty sure this is all hearsay and never happened. Alternatively, you could just be trying to make a scene (actually commenting on it on your comic probably wasn't smart) and this whole thing was conjectured by you to get advertisement. Logically I have no proof of this, so what I just said is hearsay as well, but I digress. Inb4shitstormetc.

A little advice: Color-coded text bubbles always seems like a good idea but it's not needed. The bubble tails tell us who's talking just fine. You can keep color-coding the bubble-less Pokemon noises, though. Also, make sure there's always the right amount of space in between the text and the bubble walls.

The girl in the last panel has a shadow, while everyone else in the panel and the rest of the comic do not...

What the heck I like this comic, who said we can't be fans :X

Whoawhoawhoawhoa. Whoa. Whoa. Whoa. Who's saying that? I find nothing wrong with this comic. This comic is good! At the very least, it's better than a lot of the crap comics out here on DD and SJ. Seriously, no one has the right to complain about your comic.