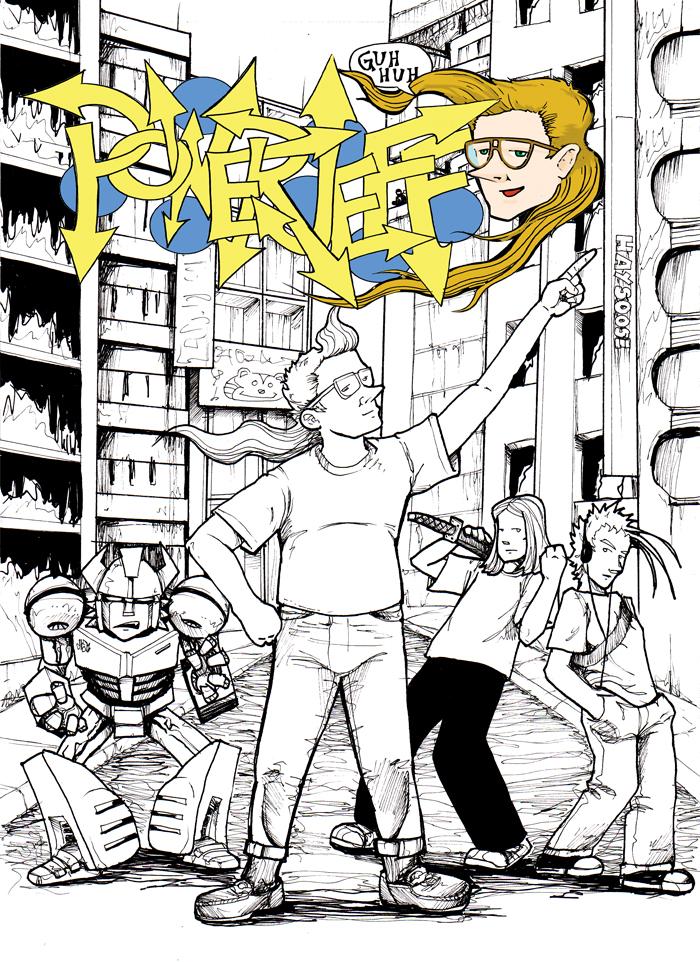 Well…..once again, Powerjeff is back, and no one asked for it. Old time DrunkDuck readers and artists may remember this story from several years ago. There's been a few changes, and we felt it would be best if we presented this beast in its entirety.

For first timers….this comic is a random series of moronic events. Originally started over ten years ago about some sophomoric happenings at our school, and it just kept growing and refused to die. Much like Jason Vorhees, just with not so much machette and sex action. Ultimately the story revolves, not around the title's namesake, but around his enemies and their chaotic daily lives. Some of the attempts at humor fall flat on their faces like the first “Fantastic Four” film….not the one that actually made it into theaters. That OTHER one. But seriousness was never a Powerjeff strong point.

Now for what's different: for starters, the very first, very unfunny, and poorly drawn first chapter/issue has been redrawn. Some of the more tasteless jokes removed and some equally unfunny jokes have been added. We felt it could use a “reboot” (god, i hate that f***ing term)for those that have “been there, read that” and for those curious as to what in Azeroth all this ridiculous nonsense is about. It's a easier on the eyes read.
All of the familiar characters are here, and added in George Lucas style to the older chapters for all of our pleasure! Yay US!

So, there you have it. I'll be updating this regularly, so if you like what you see, c'mon back. if you hate it, c'mon back.

Serge is about the greatest man who's ever lived, and those of you out there who've not had the luck and pleasure of making his acquaintance are really missing out.

awww....shucks! we're glad to be back! i like serge. he's my favorite character in chapter 4-6. he's in almost every page!! seriously!

Ah, it's back! This page looks even better with the color logo. I like how Serge is peaking out between the F's. Well, for anyone who cares, those character above, from left to right, are Jer-bot, Jeff, Jason (myself), and Json (the creator, writer, and drawer of this comic). Oh, and there's the real-life ninja Serge hidden cleverly somewhere in the background. You'll NEVER find him.