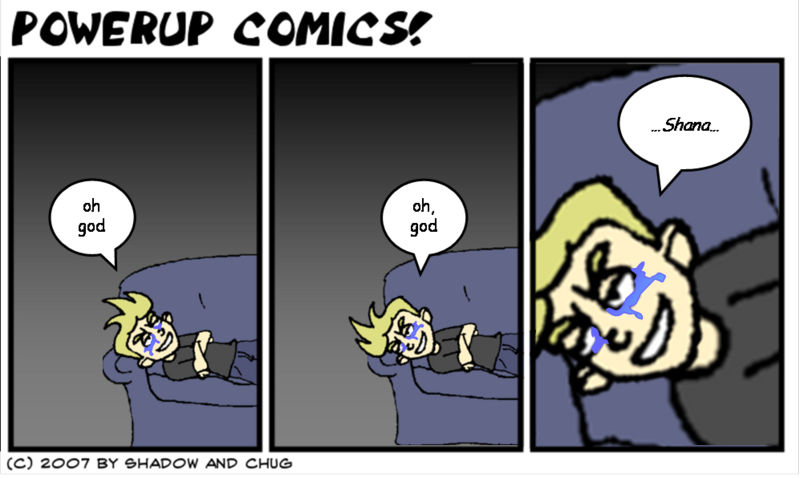 Shadow is being an emo

Hey guys! Chug here! Shadow didn't want to write a comic today because he's a big baby, and because he thought him and Shana were going to get married or something. He's kind of a pussy sometimes. Screw chicks man, all I need is Halo 3.

So I wrote todays comic. This is what Shadow is doing right now. In real life.

I feel like I actually feel Shadow's pain man. What great writing.

This comic is fail. I cannot believe that people rate it 5 stars. The movements don't change, the humor is MUCH worse than danish humor. Even danish humor is funnier.

I love that he still has the same moronic grin even when hes crying.

The joy of suffering; the pain of enjoyment. You're really maturing as artiststs. When the camera is close you can see it's a blue dog. Oh, but I guess you people don't know ANYTHING about symbolysm. SATOR AREPO TENET OPERA ROTAS

Yes! This is your punishment for this monstrosity of a comic!

Ctrl C Ctrl V LOOK GUYS I MADE A POWERUP COMIC! That was way easier than actually writing good material or drawing better than a retarded ape.

Why is he still grinning?

The tears look like face paint, if I was able to give this comic a 0, I would still give it a 1 for that reason alone (I'm going to pretend that was your intention). I love the fact that he smiles when he cries.

Uhhh....Why is he grinning and crying at the same time?

Having applied the ceremonial war paint, Shadow lays in wait and begins to chant manaically to himself. "Shana...Shana, don't think that this treachery shall go unpunished...Shana..." Oh wait, that was tears or something? Fine, then. He was crying. Have it your way.

Why is it that he's smiling and crying at the same time?

Oh wow now Shadow has a doppelganger. I should just stop looking. But I guess I'm a masochist. Dear Internet, Could you please remove some of your stupider bits from this site? Thanks. Your pal, Gordon

Um... Its not that I'm being a hater, I just think you should... you know... draw more... As constructive criticism, this comic is like a really horrible sprite comic... with vert motion-less sprites...

Man, all the ridiculous small amount of sympathy could have gotten of me was eliminated by the quality of the copypaste. Ok, so he is lying on the sofa, with a smug pose and a self righteous smile, with a bad draw paint tears. And it's supposed to convey sadness? As I said in the giantitp forum if the art gets better, or at least you get another pose for the copy paste, the comic will become somewhat better. It will still be horrible, at least until you get better jokes, but still better then it is now. BTW, Eight Bit Darkling, may I use your avatar as well?

Wow! Hey Chug, look what happens when I let you write the comic! Frig, I turn my back for one second... OK people, I'm pulling out the big ones for the next installment. It might even be the best powerup comic yet, just so I can show you haters how it's REALLY done.

He's not weird -- he's just doing the only sensible thing you can do when faced with a comic like this one. And I'm joining him in the fight!!

dude, what? i don't get it either and i read through the entire archive, and i have to agree with eight bit darkling, you've got, like, three good jokes in the archives. and he's right, it would be better if you didn't copy and paste. although. eight bit darkling is pretty fucking weird to dedicate his avatar to your crappy comic.

More copy/paste, and badly drawn tears. The comic isn't funny, and if it's meant to be a sad one, we don't know enough about Shana or them dating to really get a feel for it.