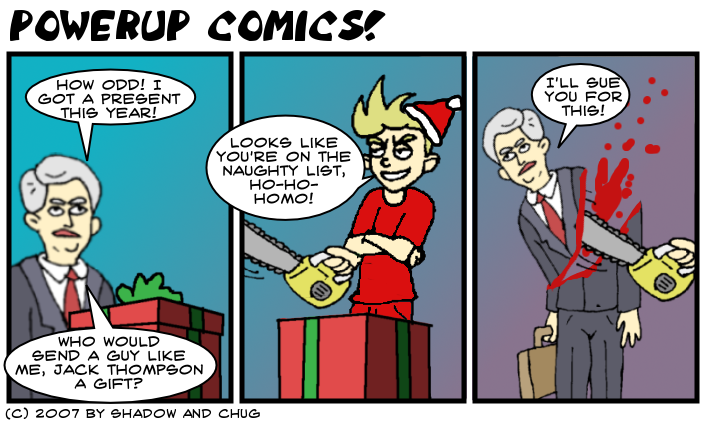 What All Gamers Wanted For Xmas

I've given you all exactly what you want. Gamers rejoice!

Alright! Harko has woken up!

Who the fuck is jack thompson? I love the elbow hand! Classic power-up bollocks!

Yeah, not against gays you dumb***.

Why don't you give us what we REALLY want and stop making this shit?

Ho-ho-homo, then you chop him up. And you say you don't have anything against the gay.

Amusingly, the hand holding the chainsaw is a right hand, judging by the positioning of the thumb and fingers, which means either he has a right hand on his left wrist and a left hand on his right wrist, or two right hands, or his hands do indeed grow from his elbows as mentioned earlier in these comments. Well done. Oh and you just killed that feeble "I don't hate homosexuals" argument.

Just stop please, I beg of you stop making this comic it is so fucking stupid.

You should probably draw new poses. Just a suggestion.

Okay well, I'm going to take the smart route out and just stop reading now. Everybody should. Get it off the top 5.

You're about a year late. Jack Thompson isn't funny anymore, and even if he was still the flavour of the month that was possibly your "gayest" comic yet.

Whereas I (the real Eight Bit Darkling) can only get it up for hot shemale action `,:D

oh, i see, the eight bit darkling imposter has two spaces in between words. that imposter is really gay and hot for shadow gamer.

Powerup Comics is a parody, you dense fucks. You're only making it worse by paying this comic any attention, as you are now what you have perhaps always feared the most; part of the Powerup Comics audience. Well played, ShadowGamer. [i]Well played[/i].

This is the REAL Eight Bit Darkling... check my profile to be sure. Just to say, I'm not gay, I'm not attracted to Shadow, and the other me's on here are fakes.

You could have at least drawn another pose for the chainsaw.

Not as good as POWERCUP, but you'll get better sirs!

WTF are you talking about Eight Bit Darkling???? Are you goo-goo for guys or something? Jack Thompson, EWWWWWWWWWWW!