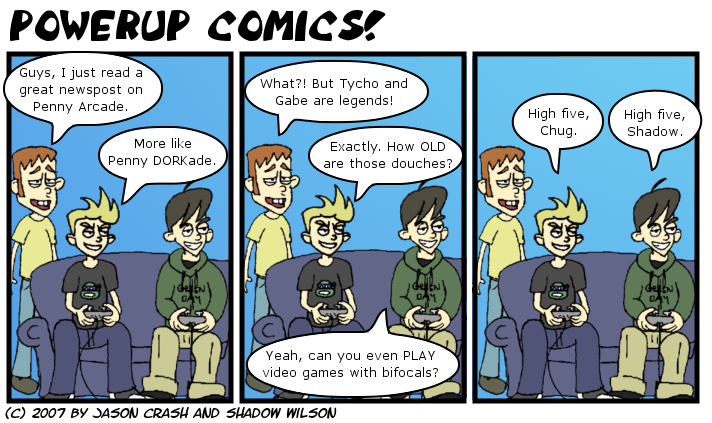 Here's a little good-natured poking fun at one of our favorite comics. Hats off to you, Gabe and Tycho. If you can even lift hats with your wrinkly old hands!

Hahah once again funny comic, Shadow, glad to see this gem has held up

I love how you cant even be bothered to draw them high fiving!

...i thought when you high fived someone you were ment to, ya know, HIGH FIVE them? wow, guess i was wrong..too muh copy and paste dude.. cos i dont do that... honest ok so i do but still, People please visit ITTTC I welcome critisim in the hope to use it to improve said comic Also, the fruit F***er said you were cr*p last night...

They're not capable of high fiving because that would require you to do something other than copy paste!

his look like typos too me i have mild dislexia so i can tell and he can probably spell rite but is just bad at typeing its not something to get mad about!!!

You know what Thrawns? You only think this pile of crap is funny becuase, like the creater, you too are probably a stupid, fat, racist bastard, with the IQ of a tree stump and an imaginary girlfreind. And Knuckles X, I have seen three year olds with better spelling than you. Seriously, do you even know how to type?

Good news! In order to battle the parody site PowerCup, I've made a tribute called Power 1Up! It will be updated daily http://www.drunkduck.com/Power1Up/

So you guys come here because you think it's the WORSE comic on DD? Far from it. Go check out some of the frickin sprite comics made in MS Paint. The art looks worse than PowerUp, and 99% of them don't even ATTEMPT a funny punchline. Go pick on an artist who barely tries. Shadow puts a lot of work into his comics (I think) and hes getting better. Everyone starts at the bottom.

The reason that this comic does so well isn't the comic itself, but it is, in fact, the amount of people that criticize and post comments about it. I for one, believe that this comic deserves to be in the top ten, seeing how everyone on this site will look at it just to remark how horrible it is. However, in my opinion, the comic itself is a pretentious piece of crap. First of all, I like how all the characters, aside from one, have that "cool-guy" expression. You know, the one with with the half-opened eyes, raised eyebrow, and smug-sense-of-satisfaction smile. Secondly, barely anyone can relate to any of these jokes in this strip. I hate how the strip revolves around how great the PS2 is and how the Wii sucks and how everything Shadow and Chug don't like is completely moronic. The worst part about these things is that these "jokes" ARE THE PUNCHLINES!!! I know that this comic strip is improving, albeit horrifically slowly, but I think that the only reason I check up on these comics is to see if I can find a joke on here that can me naturally laugh, but in the mean time, I suppose these comments will tide me over humor-wise.

Thrawns, you're damn retarded. This comic isn't popular. It's notorious. It spreads around the internet like wilfire, as many dumbass things do. Someone posts it on a forum, and people bash, and comment. They send it on to more friends, and they bash. It's not that it's popular, it's that it sucks so much ass that it's had the pleasure of being passed around, and ridiculed. "DISH COMEK WALL B NUBMAR 1 IN TEH WARLD UL AL C IS GOOD LOLLOOOLOLOL" Fuck you. Go die in a fire.

mako do you think gay ppl use acronims more than straight ppl? thats the most homophobic thing ive heard today makes me sick

Please, just stop. Right Now. I keep coming back because i think you are going to use our suggestions and stop copy-pasting, but clearly you are not. You can make a comic, thats fine. But...why did you make fun of Penny arcade? Its not even funny. There isn't a joke. At all. And I am really getting sick of the mule accounts defending this...yuck. This left a bad taste in my mouth.

Oh... Oh NO! He told me to STFU! Dude, what the HELL? Your calling everyone faggots, while your using acronyms? Shadow, put down your mouse, and lay down on your stomach until the Internet comes to collect you for burning and cake.

That's true Gargoyle. Not to mention the fact that it's PART OF THE JOKE. They have video game controllers in their hand. It's a very common thing to say when playing console games or LANing. You don't actually want to hi-five because you're playing, but you acknoledge that a hi-five is due.

I just call it as I see it. You're simply immature in a way different than I. But let me assure you that it's about 50x worse than me. Now go take some .50 caliber aspirin and STFU.

wouldnt it be redundent if they said hi-five AND did it in the picture?? you would have complained either way

WE'RE the immature ones? If not using the word "faggot" twice every sentence is immature then I guess I'm immature.

Hm? What? Wrinkly? Their, like, 25! (Their fucking young, you piece of shit) And you didn't even MAKE them high-five in the last panel!