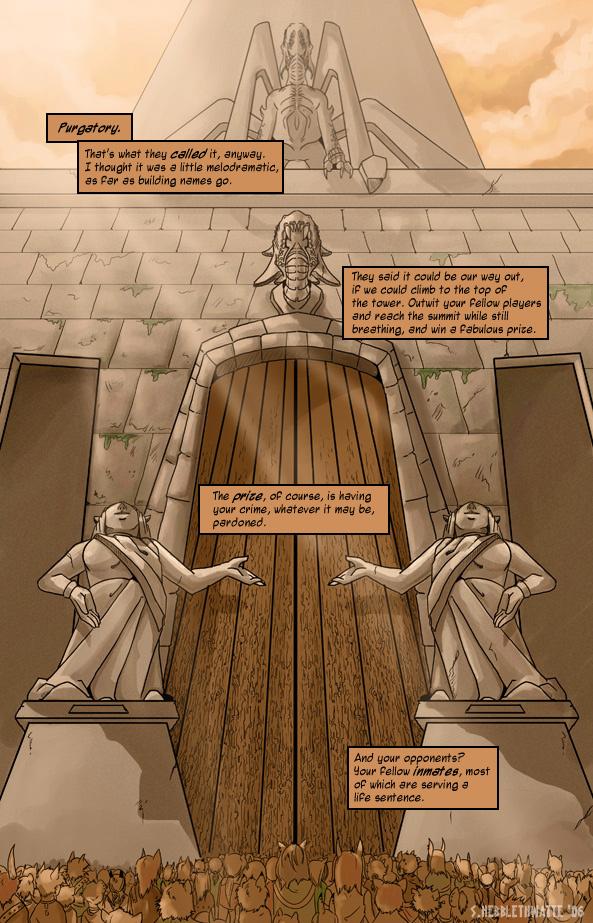 I just had this site pointed out to me by someone, so I decided I'd check it out. =) Seems like a fun place, so hi! Page one! I'm still not really happy with the angle here, but I messed with it for so long I was starting to go cross-eyed. I may go back and re-draw later, but.. yeah. Later.

That's an AMAZING perspective! And all the little peoples in front of the door!! I see where the "reality TV" thing mentioned in "Off Hours" came from now ... Survivor: Purgatory Tower! Heh.

I just found this comic. First page is awesome. I love the angle and how the text boxes lead your eye down to the inmates. Excellent. Looking forward to reading the rest!

Hmmm.... Came all the way back so I could link this to my brother, and then I realized that I never commented on it, so now, I gives a 5

now that is perspective damn!

Really beautiful, that angle is so hard

Ooo, impressive perspective and crowd! the detail on the wooden door is quite nice too.

This is a very refreshing comic!

I tyhink the angle is fine...its the fox people near the bottom...I didn't initially notice them when I first viewed the page. maybe bringing one of them closer to the foreground...but the page is gorgeous...if that's the only problem with the page...still a great page!

I love the concept, don't disappoint me. 5 for coming up with the idea.

sick comic, love the detail you put into each frame. Very nice job, especially for your first time dealing with color in mass production.

Yaay, furries...! Or... Partial furries, because they're just eared and tailed, aren't they? =/

good work give me ideas

Wooo nice work, professional. Fitting layout for the comic presentaiton too. Love the coloring, I will keep watch.