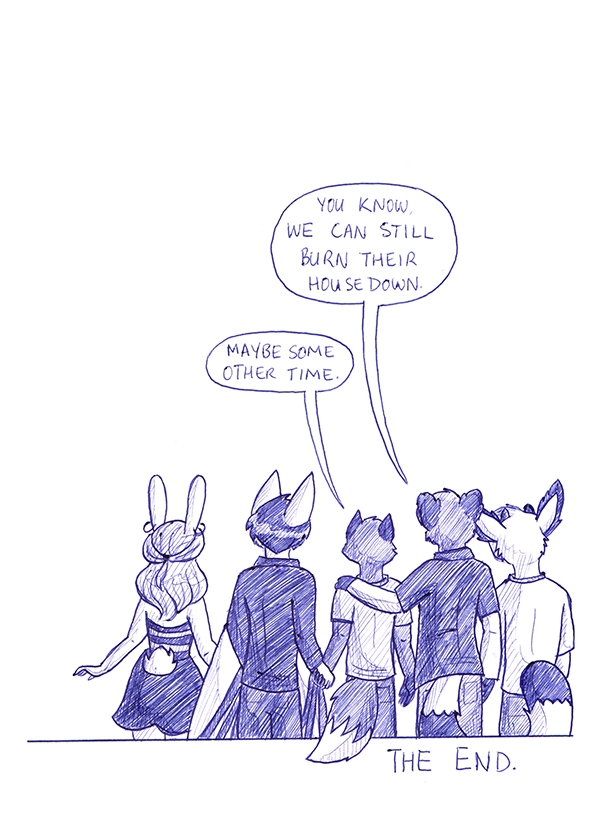 Holy shit. I did it. This is the last page of Rasvaar. I honestly didn't think I'd ever see this day.
When I started this comic I was 14. (There were about 30 pages where the art was even worse, which I re-did in this slightly better style, haha.) As a teenager I had a lot of trouble with gender and sexuality and making this comic really helped me with that. I also had friends who loved to look through my sketchbook and they were my first audience. Then I uploaded this to the web and the overall response from people made me so happy. I'd been interested in storytelling as a kid and it's my career now as an adult, and Rasvaar was an important part of that. I learnt so much from making this terrible comic.
I grew out of this when I started university. And I would have just left it unfinished forever, if not for the occasional messages that I got from people who really loved Rasvaar. I'm honoured to say that I've had messages from people who said that this helped them come out of the closet. To everyone who has ever said a kind word about this comic, or who has reached out to me about Rasvaar; THANK YOU. You are the people who kept this comic alive. It was hard for me to feel moitvated about something that I had out-grown, but any time someone reached out to me, how could I not make a new page or two? Thank you so much for sticking with this comic. I'm so sorry that the updates were sporadic and that I didn't finish this sooner.
Originally I was going to give this comic a very obvious ending. Rasvaar would get home and his parents were gonna be all, “Uh yeah, we knew this whole time and we were fine with it, dummy.” Hahaha, the trip was for nothing. But I prefer this ending. The trip wasn't for nothing. It gave Rasvaar the strength to face a pretty tough situation. I'm of the opinion of waiting to come out, if you know that your family will throw you out. Because homelessness in the LGBT community is a big deal. This is something that happens and it sucks. So I'm in no way saying that you should come out into a potentially dangerous situation. Wait until you can support yourself, that is totally fine and valid. But for Rasvaar, the rumor was out and on its way to his parents, so his hand was forced.
So yeah. This is it. Again, thank you so much for reading this. Thank you so much for any kind words you sent my way. You have no idea how much it has meant to me. I love you all.
xo Lex

Thank you, I'm glad you liked reading it. :) I'm also really glad you enjoyed the ending. It's the main reason I finally finished it; I felt like they couldn't go through that journey without this ending, it really validates everything Rasvaar went through. It wasn't all for nothing, it was to make him strong enough to withstand this. Those are high compliments indeed! Although that raise would be a raise from nothing, I've never made any money from this comic. :P (Which is fine, that wasn't the goal, I just wanted to tell a story.)

Love this work mate, congratulations! You just reminded me why I am a furry. The thought of snuggeling with someone warm and soft gives a warm feeling inside just like this comic did . I love this ending, it has a realism to it that is not just another "everyone loves you no matter who you are" happy ending. A little bittersweetness is all it took. Besides it is nice to be reminded of how the world works sometimes :) A lot of life lessons and a lot of humor and not a lot of sexual tension. It's been a great read and re-read. The best compliment I can give you is "you deserve a raise" and "I appreciate your work and am greatful that you decided to go through with it" -thank you forever!

Thanks for reading! :) I can't believe it either, but I'm really glad I could give an ending to everyone who's ever read this over the years, especially those who ever had to wait for an update. I hope you like it just as much on the re-read! ^^

Wow I can't believe it's over. I admire you for sticking through it and keeping the art and writing consistent. It's a great story and I'll have to read through it all again soon. :)

I'm glad you liked this so much, thank you for your comment! :) I'm definitely feeling good about giving this comic an ending. Thanks for sticking with this comic and the worst updating schedule ever in the world. :P

Thank you, thank you so much for finishing this comic. It's great that it's finally been capped off. I've shared the link with others, and from some responses, they said they really enjoyed reading it. I really enjoyed Rasvaar. It was crazy and silly at times, but that's what made it fun. It dealt with serious issues, but in a positive way that showed a good way to engage with them. Overall, I just really enjoyed the comic, it's character, the story, and their journey. Thank you for making this comic, thank you for everything.

Thank you for your kind words. <3 Don't get me wrong, I was dead proud of this when I was a teen. I just look at it now the same way I look back at my teen self; fondly, but with embarrassment. :P But I'm so glad that you liked it, thank you for taking the time to let me know. (You even made an account just for me! :D)

Just made an account to say this... I just read the entirety of Rasvaar and just wanted to say, thank you for making it and more so for finishing it. You mention that it's a terrible comic, but that was a freaking incredible story for something you started making at 14. It has honestly made me inspired and I will not likely forget it very soon.