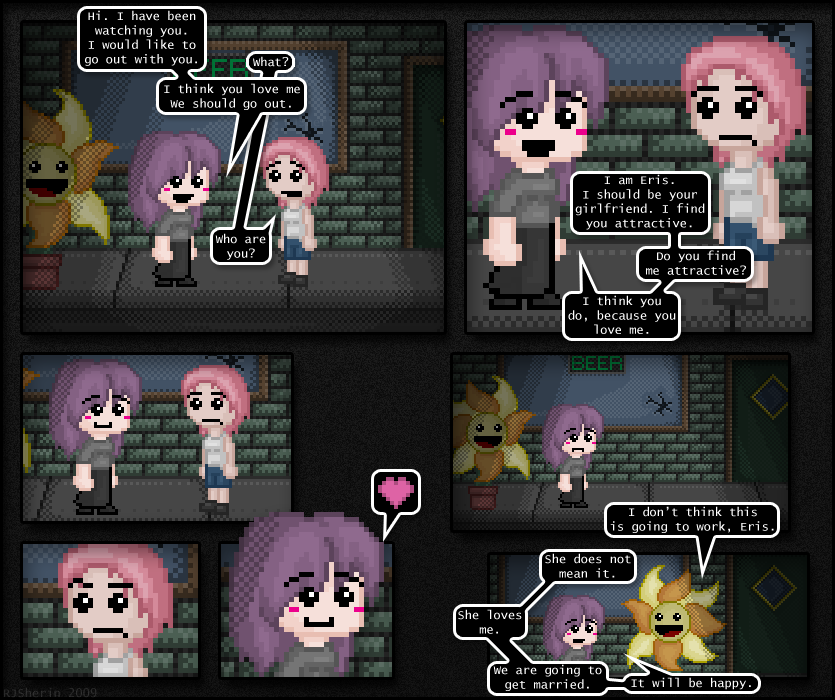 I expect I'll alternate between pages of Eris and Robert back and forth from time to time. Honestly, I don't make these often enough to really update frequently. I wouldn't expect more than an update or two a month.

also, if you updated once a day or every once in a while instead of posting it all the same day, I think that would be much better

This is a nice comic =) The sprites could use some work, but they are pretty good. Better than most the sprite comics on drunkduck, at least.

This probably would be XD

You know, this'd be MUCH easier over MSN due to comments being a bad medium to use for a discussion.

You havn't pissed me off :P As a quote from my friend (I didn't make this, and my parents saw it and were disturbed): "I wish you were my brother because gay incest is win!"

Okay, this Eris arc has officially creeped me out. Great Job! And what's this? judging by your comments i'd say you've already pissed people off. Awesome.

Well, my sense of humor has certainly adjusted quite a bit over the past year or so, but you can be sure something like that will work its way in somewhere.

Don't worry. Just make the comic offensive, include "O Rly? Ya Rly! no Wai!" And you'll be fine :P

Yeah, I know how that kind of thing goes. Easy to get sidetracked when you're not too dedicated to your hobbies.

Well me. I havn't updated my comic in a year or so

Oh I intend to toss it back up here and start drawing it again sometime soon, but I'm very busy these days with being lazy. You don't get this kind of slacking from just anyone!

HOly crap! I loved that comic. Shame it went. I found that brilliant (Although I was like 14 when I read it. Shhhh...) mainly because it's so obviously offensive but still hilarious.

Absolutely! That is very much me.

Hey, are you Rich as in Everything Must Die Rich?

Seeing as your not responding to me anymore, I can only deduct that you don't want to give it a shot, a shame really, I was really hoping you'd at least try it, well, goodbye then, I'll leave you alone now.

You can try and make me get angry or annoyed, but that won't work, if you can't act like a decent human being. then I'll leave, now what about trying to make a regular conversion? Are you willing, or do you want to keep this up all day?

Of course. You cannot be lol so deep and edgy without NEVER FEELING THINGS! How could I have not noticed?

Angry? Whatever gave you that idea? I'm not angry, I'm just saying what I'm thinking, in fact, I'm near incapable of feeling actual feelings.

Oh no! Someone on the internet is being angry! How could this ever be?

These sprites look a bit too much like Habbo to me, the text bubbles feel too dark, also, their not moving.