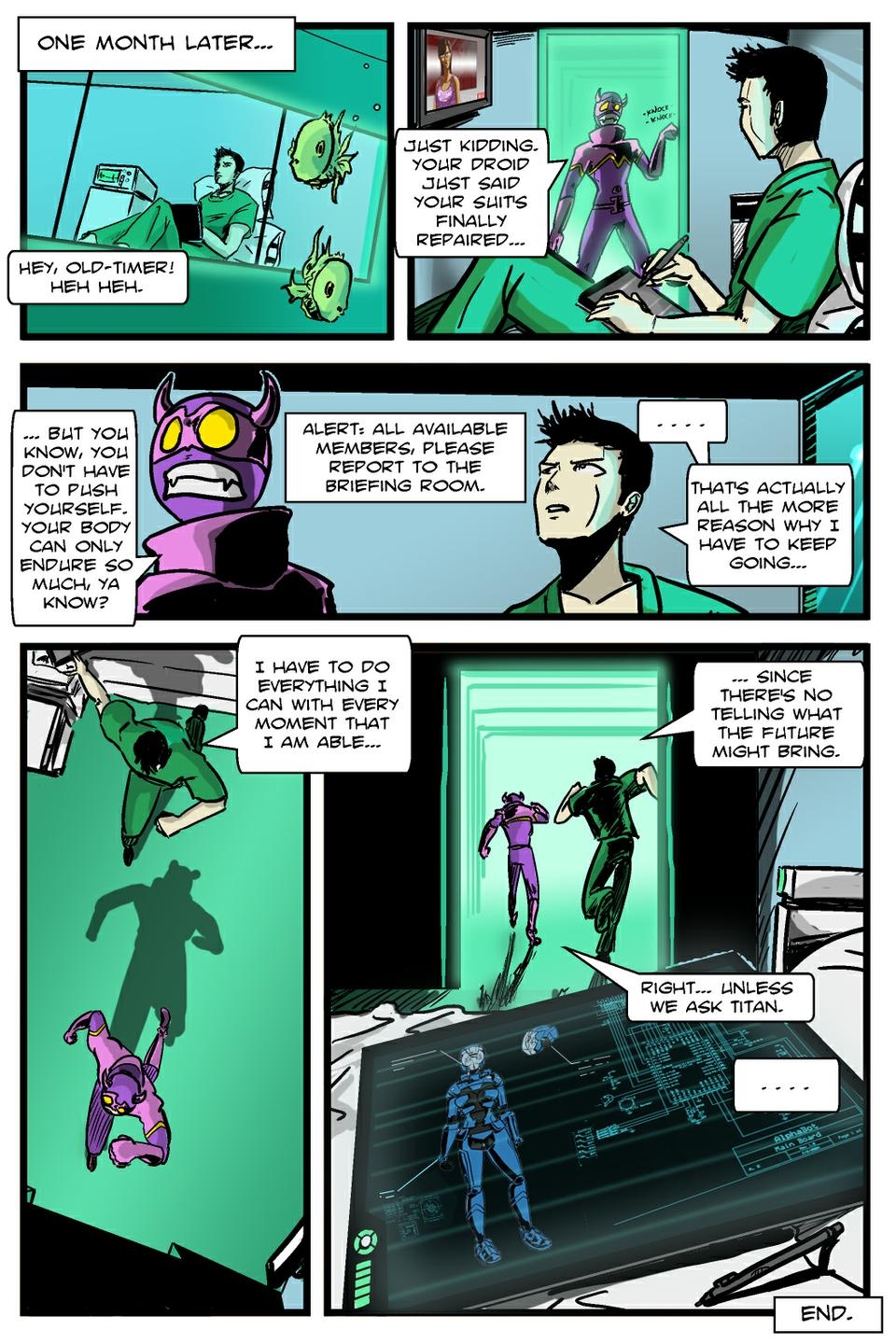 Edit 5/31/2011:
Well, I logged in, when to my surprise there was this big shell head on the left of my screen… so I thought… Did they re-format drunkduck so that I see my comic's icon on the top…? I was so confused because I never thought a finished comic gets featured, so I'm also quite grateful. Thanks for reading! Feature bumped the ddrank up to #18 overall.

Fukujinzuke before 5/30/2011
And that wraps things up here. Thanks to everyone who had followed and supported this webcomic through the years!

I'm a little shocked that it actually lasted this long considering this was originally just going to be a several-page origin comic.

SHELL has upcoming appearances on Heroes Alliance, so keep an eye out for those. I think Desperado will show up as well, though there might be some significant amount of time between now and when that happens.

Thanks to both Abt-Nihl and MrHades for expressing that this series should be feature-worthy. That truly meant a lot to me. No, SHELL never got it, but at least it went all the way up to rank no. 50 overall at it's best (August 2010), and the highest page-load count was 2,330 in a day, with 350+ unique readers. We're ending this series at rank no. (edit) 86 overall. Rock on.

Oh, and no, I'm not alluding to any future comics with that last panel.

See you all at Heroes Alliance!

Fuku. This is the best. I loved reading it. Wish here was more but I completely understand. Hopefully I will do the same with mine. Rock on.

LOL - I totally missed the news reporter from 'Vanguard' in panel two!

Thanks! The only unfortunate thing is that the judges will be missing the animated gif pages as well as the old website html doo-hickies I used to have on this comic. Oh well.

Thanks to everyone who nominated this comic and helped it get in with the finalists of the 2011 DD Awards! It was a very pleasant surprise!

Congrats on your nomination in the DD Awards. [IMG]http://img.photobucket.com/albums/v200/Niccea/Drunk%20Duck%20Awards%202011/finalists/completed.jpg[/IMG]

Well, Shell may be done in his own series, but I have a feeling he may be making an appearance or two in Vora in the future :3

Gonna miss him too. But, your book deserves the feature! :D

Awesome page! And as far as the feature is concerned, better late than never! Even at this late stage, being featured is sure to attract many new Shell fans. The crowds will clamor for more!!

Congrats on the feature!

Ah, I see waht she means by "almost too late to feature". Oh well...looks good

FINALLY! About time this got featured!

Over 350 readers knew this finally had to happen. Congrats on the feature. Well deserved a hundred times over.

congrats on the feature! Well deserved!

Congrats on the feature--well deserved!

Well what do you know! Congrats on your feature!

Featured?! Now?! Ha ha! Congrats Fuku! my campaigning worked then! For all you new readers, head back to the start and enjoy one of the best comics on DD.

I haven't gotten around to reading the last few pages yet, but I just saw that SHELL was finally featured! Congrats!!

It will be sad to not see more here, but he will still be rocking out in HA and perhaps in other comics he'll be popping up too so who knows :)

I salute you! Thanks for providing an awesome and exemplary comic!

Great end to a great series. The best things about this series was seeing the art evolve, and the close connection with the HU-verse. I'm gonna miss seeing updates for this it was one of my faves.