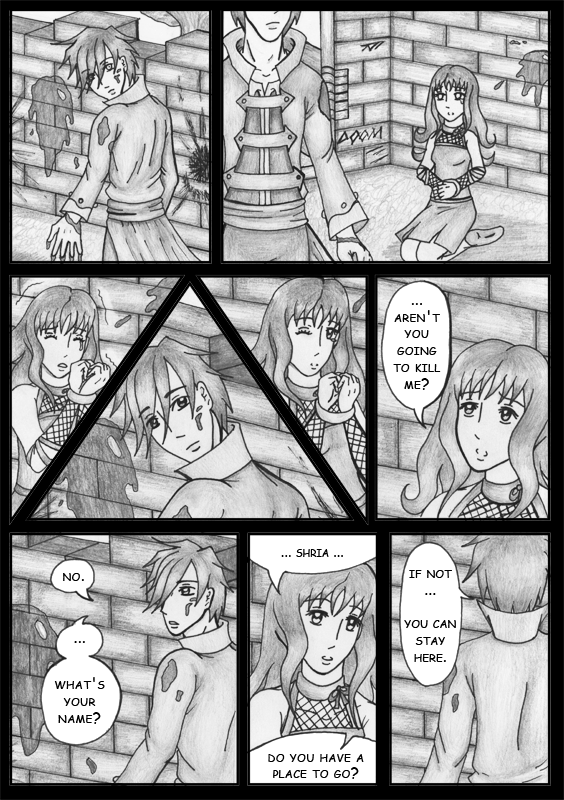 Could it be that even Zotia has a soft spot in his heart for a pretty girl …? … … Nah xD Though there is a reason he spares her. Can you guess what it is?

As for the girl, she is the one that Zelig saw in his dream, though her character design has been changed a bit because I thought her hair was too silly.

For some reason, this page took hoursssss to complete. Each panel took about an hour to shade, and that's excluding drawing and inking x__x I guess that's just what I get for doing the comic by hand rather than using the computer. I really have no idea why it took so long.

As I was re-reading TwoMoons, I found and old conversation Jenshin and I had about silence in comics. She was saying how there is very rarely any moments of pure silence, usually they have at least an elipsis (“…”) or a sound effect, so this page is dedicated to her! It's 55% pure silence :)

@Toshubi: Zotia just doesn't seem the fatherly type to me xD @Peipei: Thank you, I'm glad the mood came across so well :3 @simonitro: Oh he wouldn't think twice about harming a girl, if she did something to deserve it xD @bougunsou: You're still in love with a lot of things! Yay! I'm glad it's love-worthy ^_^ I'm proud of how the hands turned out in panel 3, but that was just a fluke xD @EmilyTheStrange: Thank you! ^_^ @kyupol: Thanks for rating :3

This page has a really nice pace.

I know exactly how much time and effort went into this page! Makes it all the more super :) I am STILL in love with Zotia and his coat. Panels 3, 4 and 5 are my faves, because I love their expressions.. (I also am still in love with the hands!)

Oh I get it... he doesn't harm girls. Then, if I were one of these guys, he might've taken off my head.

Good job on this page :3. I love the intensity of this scene.

If I had to guess why he keeps her, I'd say to to have his child.