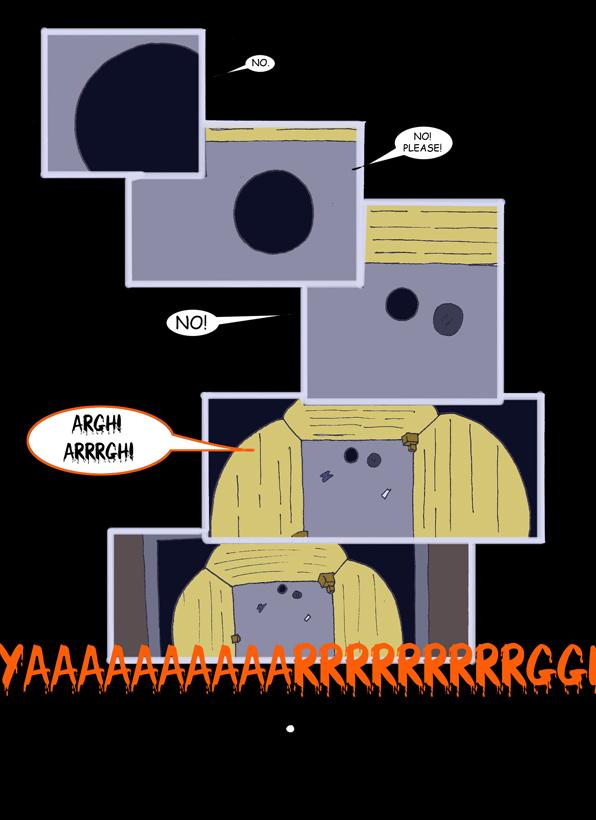 I'm trying my best. I need to spend more time on the artwork. Please, let me know what you think.

This is page 4 of 4 of this update

P.S. I plan to update a scene a week. Every wednesday.
P.P.S. I know not much is going on here, but trust me the plot will thicken, quickly. This is just to act like a prologue type thing.

WHAT THE HELL! I never commented on this?! Well, here I go anyway. 1. Style: I dig the style. I love the guy in the suit. He is one of the coolest and best-drawn suit guys I've seen in a long time. 2. Color: I like the color, but am not as thrilled with it as the art. I don't like the use of gradients so openly. 3. Lines: Your lines could be darker. They seem like they're just scanned in pencil with no tuning. You should tune them and make them darker. 4. Other stuff: a lot of people have a hard time drawing background things to make their backgrounds seem interesting and busy. You're borderline, here (here being all 4 pages). I suggest looking at some actual cityscapes while drawing your backgrounds and taking little details you see in the pictures and put them in your art. It will help, trust me. In total you still get a 5, because I still like this and want to see where it will go. Get up the next page soon!

its looking good dan, noel and julian would be proud......

Great style...looking forward to finding out what's going on!

I like the character art. It kind of reminds me of the style a lot of french artists had in european comics I used to read when I was younger.

Well, that's what you get for trying to escape a monster by climbing down into a sewer, I guess. Nice camera angles on this one, and nice pull back on the distance and fade to black.

Ah, this comic is awesome! I love your art style, and I really want to know what happened to the guy.

Wonder what happened... I love the comic so far. I wasn't expecting your art to be so unique and crisp.

I just want to know what the hell is coming after that guy! Maybe it's his mother with a christmas sweater! ... ARRRRRRRRRRGGGH! ... Bad memories of raindeer sweaters.

This is scaring me!

This is definitely a "not good" moment for the dude who to tried to escape down the manhole. :)