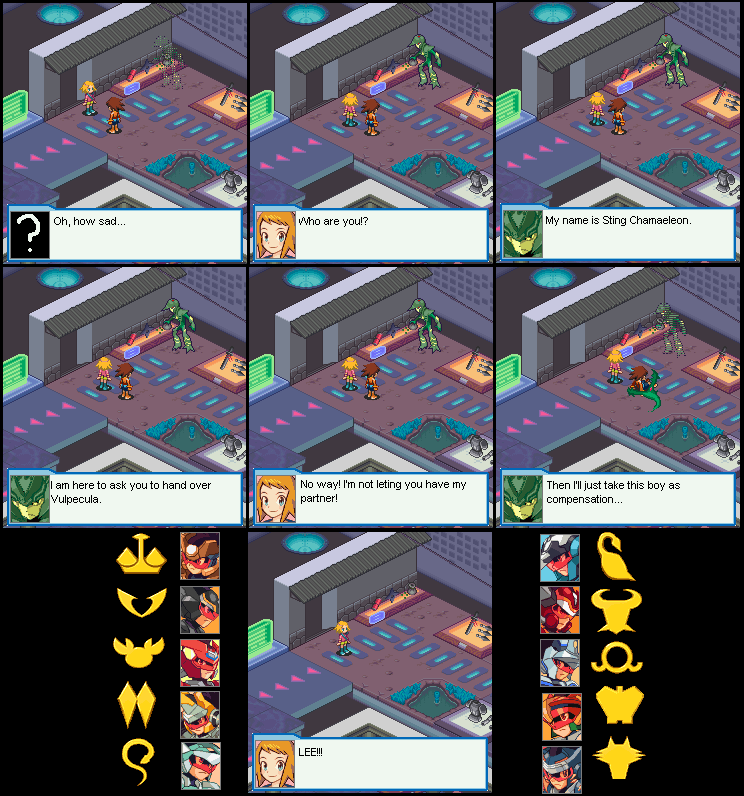 Little to say other than I put in the symbols at the bottom so I had something other than blank space.

This comic was actually pretty good, too bad it may never be finished.

A year later and he still isn't back from his so called "break". We win.

No I'm simply taking a break from this comic, troll all you want, I'll still make comics...

Seriously, Lee, I hope whatever comic you're working on gets a lot of criticism instead of praise since you refuse to improve.

Hahaha. See? He can't take criticism. He simply gives up on his comic.

no I simply decided this comic wasn't worth it, so I'm going back to work on another.

No response? I guess you chose to gtfo. Too bad you weren't mature enough to actually learn from this and instead chose to (what appears to be) run away.

"Either take criticism or gtfo."

everyone else is at it so i'll join in, did you honestly infact, not only threaten me, a random internet user, but also threaten me with fan boys and girls?seriously man wtf? and also dont know if any of you read XAZ a megaman X comic, but this guy posted a comment claiming theft, so i prooved him wrong and he told me to say it here so you could all see, so you know, hi

"I believe everyone can tell that, but I'm just simply trying to have fun on DD I'm not trying to be the best, I mean I don't plan on spriting forever." No one is telling you to be the fucking best. THEY ARE SIMPLY TRYING TO HELP YOU IMPROVE ON YOUR FUCKING COMICS WITH CRITICISM. How hard is it to understand that?! Either take criticism or gtfo. Jesus.

For the love of God learn the basic parameters of the English language. That response is nearly unreadable. I saw the fake account, and frankly you would have to be stupid to fall for it. He had forum posts and his scores were worse than yours. He had less friends. There was a space in-between Leenex and t. He had no comments. You should have seen that you couldn't edit your profile, that you could have added yourself as a friend. To you it should have been glaringly obvious. Yet still, you see this and go around claiming you've been hacked. The fake fooled the real thing. (Now to be fair you aren't doing that now but still... seriously?) Of course, I'm not here to review your character - merely your comic. (unless of course the two become intertwined) And there is a world of difference between saying you need to improve and actually improving. And from what I've seen of your comics, you're all talk.. but no walk. Actually improve or people will always feel this way about your comic.

Look I know I'm not good. I believe everyone can tell that, but I'm just simply trying to have fun on DD I'm not trying to be the best, I mean I don't plan on spriting forever. I also realize I have problems with criticism, I'm trying to work that out. But all I'm trying to do is go on the net make a small, comic for fun, without people taking my name and making fun of me. I mean what is this world coming too when people have so much free time they actually take the time to remake an account right down to the game scores!?

Man, I wish 90% of the sprite comics on Drunk Duck would get these kinds of criticisms. These days all you see is people praising poorly made sprite comics :/

A lot of the comments on here are right. This is really bottom of the barrel stuff. My advice: stop making comics. Period.

oh, and i saw you making replies to your own comic in the back pages there. lonely?

the sprite work is uninspired, and the narrative is disjointed and slow. the storyline (such as i was able to piece together) is somehow derivative AND amateurish. the dialogue is slow, sterile and unengaging. the characters are poorly introduced, and that only happens far too late to be of any help explaining anything. you routinely misspell things and fail to notice it, further bogging down the reader. while everything could be improved, from what i've seen you won't be able to. look into something other than sprites as a medium, as they're too restricting for some concepts. and if that doesn't work, give up. the world has plenty of hackneyed high school kids that make something so they can have attention without actually exerting effort.

The point is, you are still brushing off those that give criticism. As such I will provide a panel by panel review of this comic. The first panel is a mess in terms of the image (the question mark)that we see. Was this drawn in paint? You should have used some fonts question mark and just enlarged it. The dialogue is okay aside from the grammatically incorrect comma after "oh". The second panel makes no sense in terms of dialogue. If the line this girl gives is meant to be a question then the question mark should have come before the exclamation mark. Thus it would have indicated that a question was being asked. This "Chamaeleon" character is an edit and stand out from the rest of the sprites aka it's a poor edit. The next panel is the same as the last one minus a dialogue change, thus visually uninteresting. This panel is not interesting to look at seeing as it too, is the same panel. And not only are you putting minimal effort in the art, you are putting no effort in the writing. "Leting" is not a word. In case you don't get it... you've misspelled "letting". And finally you give us an art change however minor. The dialogue makes little sense in relation to the story, but at least you didn't spell anything wrong. (How do you spell compensation right but not letting???) This last panel simply doesn't convey the mood you want to create at all. There is no camera change, no sprite change... She is simply standing there saying LEE in all caps. The "things" on the sides detract from the comic and are off center from the panel they surround, making it even worse in terms of taking away from the comic. It seems like you aren't putting much effort into this comic. This is something you must change if you desire to not have this comic be as unreadable and terrible as it is. I too agree about the bullshit talk in regards to simply not reading it. That statement wasn't written in response to a possible "it's gay" comment by roomoo it was directed at those that had it in them to try to help you. Of course that might explain why between all your comics your improvement has been minimal at best. Simply put, stop ignoring people and put some more effort into your work. As you've stated dozens of times, you know you need to improve.

Hi, I looked at your comic like you requested and I don't think your comic even rates "ok" like you said mine did. Everything is pretty flat and drab, and your comic has absolutely no direction -- there's no sense of story or what's going on. While I applaud you trying to do a comic, you have a long way to go.

ok but if you could could you put it nicer than saying "It sucks, it's gay..."

"as well as spell checks" I wonder how many times I've heard that. "also to those who do not like my comic you do not have to read it" That is bullshit talk right there. If someone doesn't like your comic, they should give you criticism. You're basically saying everyone in this page should go away, especially those that tried to help.

Criticism is welcomed where trolling such as saying it is gay is not.