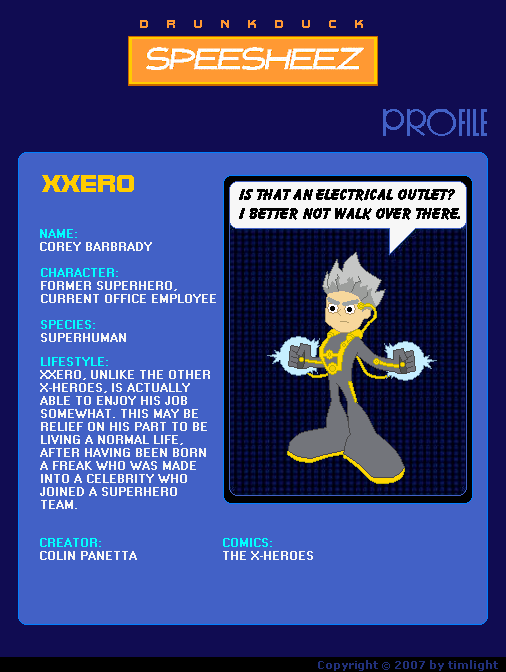 Powers/Skills:
Xxero unintentionally picks up electrical charge from the air and any surrounding objects, and absorbs it into his body. If too much time goes by and he doesn't dispose of it he could explode, putting those around him in constant danger. To compensate for this he wears a special suit that absorbs the energy from his body, stores it in a backpack, and allows him to discharge it from his hands.

Background (History)
Xxero's powers separated him from his peers when he was growing up (not to mention standing his hair up and turning it white!) but their flashy nature got him lots of work in commercials and on television. But the Hollywood lifestyle only served to alienate Xxero further. He met Captain Deathray on a shoot for Precious American Magazine. Their combined celebrity allowed them to get the funding they needed to start The X-Heroes.

your characters are growing on me.

Hey! Just noticed that this stuff is up. Awesome, thanks so much. I'll make it a part of the next news update on TheXHeroes.com

cool, i must appluad your mastery of spriting