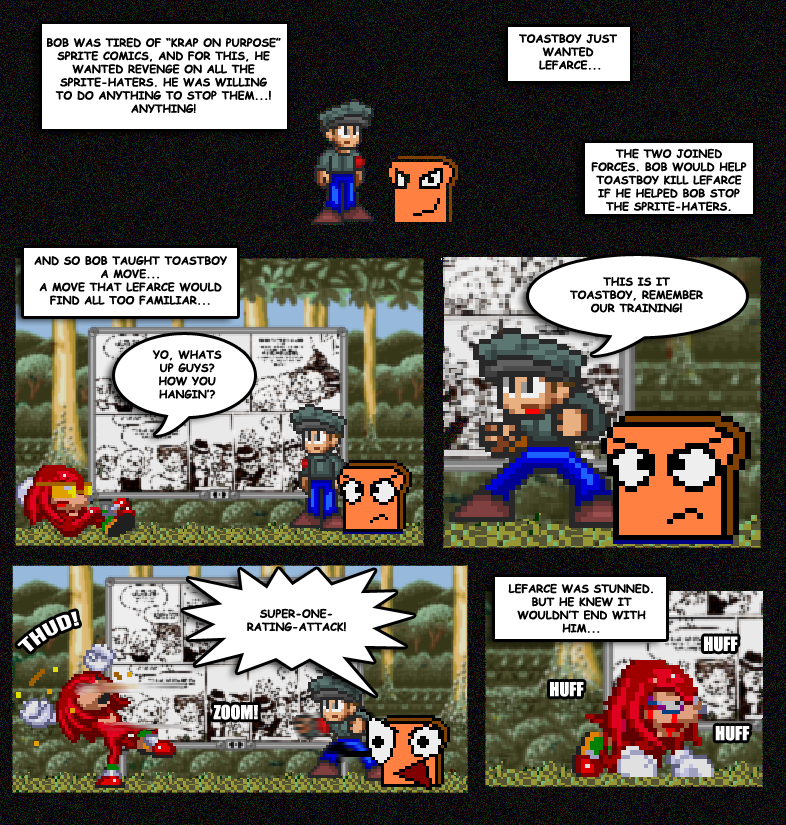 This page was done by Lefarce

This comic is awesome. I loves it.

Say, this gonna update anytime soon? I know I'm being a hypocrite, but I wanna find out how Rob get's killed!

It was an error I made with the image that I didn't catch till much later. The layers are mix, unfortunately.

What!? It wouldn't send the five through? That's whack!

I love to kiss my own ass.

I'm still in awe that people have doubted my spriting abilities due to ZOMG. Seriously, I wouldn't mock something I'm not at least decent at. That would be "retarded". Thanks for all the nice comments guys. Glad I'm not bleedin' your eyes ;).

Maybe because Rob and ToastMan have never put any effort into anything they've done?

Hehehe. Very good. I dunno why, but panel 3 cracked me up.

[QUOTE]i heer abowt dis wons. rich tel me how toestman an rob ar stoopid an liek to fuk horsis! i dun liek peepil hoo fuk horsis![/QUOTE] So Rose has a DD account now. I suppose Ceruss isn't far behind. PS: I wuffles you all!

This is awesome XD

Now this a lot better then the Krap on purpose comics! ^_^

Your own attack against you eh LeFarce? The ultimate attack would be reporting him.

I should really get to posting my sprites:P