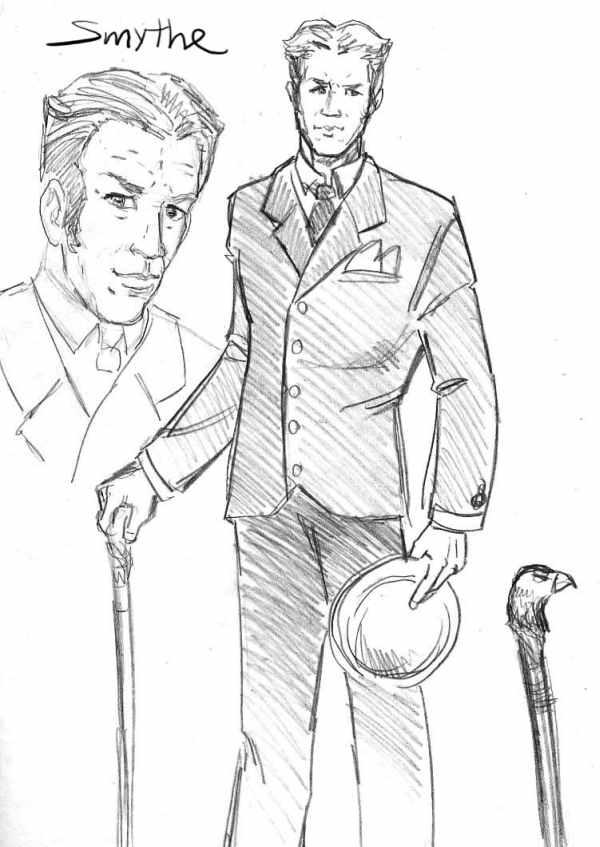 Welcome to “The Continentals” I'm writer/creator Darryl Hughes. And together with my partner artist Monique MacNaughton we thought it would be fun
as a lead up to the launch of our new web graphic novel “The Continentals: That Shape am I” to let you in on just how it was made. So sit back, relax, and enjoy the next few weeks as we show you everything you ever wanted to know about the making of “The Continentals”.

Everyone who knew me and my work before I did GAAK with Monique was utterly shocked that GAAK (a Spielbergy 50's style alien invasion adventure) was some thing that I'd even consider doing. See, I'm a noirist (a phrase I'm coining). A lover of all things Dashiell Hammett, Raymond Chandler, Frank Miller (in comics), Jim Thompson, and all the great hard boiled/pulp fiction writers of yesterday and today. Stories filled with cops and robbers, murder and mayhem, gamblers, grifters, back alleys, bar rooms, no-tell motels, gold diggers and men to be dug.

So a few years ago I began watching some of the great UK detective shows on PBS like “The Inspector Lynley Mysteries” and the amazing “Prime Suspect” series starring the equally amazing Helen Mirren. And then PBS began to show new and re-imagined Sherlock Holmes movies like “The Hound of the Baskervilles” and I was struck by how good they were. I always end up doing the projects or cultivating the ideas that make me go, “Hmm?”. And the thought of a brilliant Sherlock Holmes-esque hero, who had a dash of James Bond for flavor, and had thrilling adventures as one of the world's first “secret agents” in 19th century England made me go “Hmm?..”.

“In the months following the Ripper murders, Queen Victoria commissioned several ”agents“ into her service. Each skilled in various arts of criminology and law enforcement both time tested and innovative. They are known as ”Continental Operatives“ or ”Continental Ops“ of a division of the British Military known only as ”The A.T.S.T.K“. These ”agent in her majesties service“ work independently of local law enforcement and their ultimate mission for the crown is a sworn secret. He is one such agent…”
–Narrative from “The Continentals”

In 1889, one year after the notorious Jack the Ripper's murderous rampage, a new killer stalks the back alleys and side streets in the eastend of the city of Mansfordshire, England. He is known only by the dead bodies left in his wake. He? The Mangler. So named for the brutality of his attacks on his victims, five souls in all who crossed his path and fell victim to his murderous appetite. Spiraling Mansfordshire into the fathomless depths of an abysmal unease. Continental Operative Jeffrey Tiffen Smythe and his partner the gender bending adventuress Lady Fiona Fiziwigg, along with local law enforcement, must unravel a tangled web of clues that stretches from posh upper class society, to the dregs of lower class society, through all the back alleys and board rooms in between, and ultimately delve into the deepest, darkest recesses of the human psyche to find the truth to the question of–Identity.

From the beginning I saw and heard Smythe clearly. From the way he turned a phrase, to his walking with a slight limp with the aid of various canes as a result of an old injury. Using actors Hugh “X-Men” Jackman and Eric “The Hulk” Bana as physical “types”, I set about creating Jeffrey Tiffen Smythe. Agent 86. Continental Operative of the A.T.S.T.K. Smythe would be a cerebral man of action. An aristocrat from a politically and socially well to do family living in the city of Mansfordshire, England in the wake of the Jack the Ripper murders. Chosen to work as “an agent in her majesties service” to ensure, in a world of mounting evil and unrest, that the good guys win, the bad guys lose, and as always–England prevails!

That's pretty much how I described him to Monique who had the daunting task of giving life to our hero. She got it in one try. I remember her saying, “He's more Hugh Jackman then Eric Bana” and mentioning that she'd given him a parted down the middle hair style (that to this day reminds me a bit of Wolverine. LOL) that was popular in the 19th century. But when I looked at the design sketch, he looked familiar. He looked like someone I knew Or imagined I knew. He looked like Smythe. And I knew we had him.

That done, the next challenge was ahead of us. When I came up with the story for “The Continentals” I decided that, like Holmes, Smythe would need a partner. But for this partner I would not look to Watson for inspiration. Instead I'd look to one of my all time favorite TV shows the 60's spy series “The Avengers”, and to one of my all time favorite female characters Emma Peel, as the inspiration for Smythe's outrageous, gender bending, female partner the adventuress lady Fiona Fiziwigg.

Yeah, he does seem very much aware--Particularly of us. LOL! But I guess a super detective/secret agent has to be aware of all the fine details the rest of s would overlook, right? Dee - TC writer dude

I love the expression in his eyes. Your drawings have life to them, and I like that.