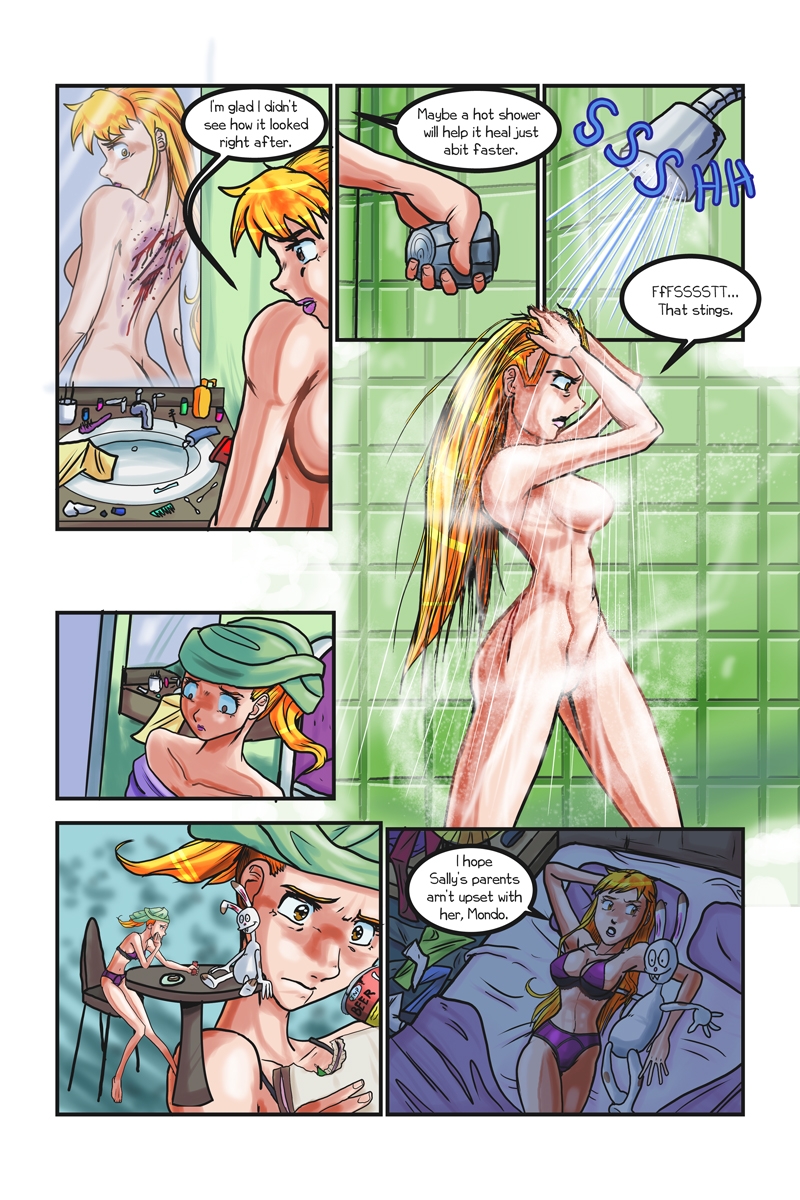 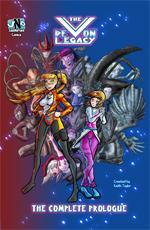 Fenny's contracted to be nude or in her underwear in almost every issue! She skipped issue 6 of Prologue so she must have had to make that up! :P

I think the events of Prologue shook Fenny more than she wants to let on. And welcome back Mondo! He appeared in Prologue as a toy Fenny had as a kid. Seems she still has him.
Mondo was a character from a comic I made as a kid that was basically a rip off of Ren & Stimpy.

And speaking of Sally I wonder what she's up to? Maybe this would be a good page to end on a Fenny note and move over to see Sally next page! =D

Me too! It's nice to see heroes making sure to take time out to stay clean! And one day Mondo will get his own strip again! One day!!!

PeiPei & Vickie: To be honest when I drew issue 4 I needed to figure out what Fenny slept in and went with underwear. I was single then and assumed lingerie was something some girls actually slept in. Now that I'm married I've seen more that it's probably not as wide spread XD But surely there are girls that don't just use it for sexy fun times, right? Anyway, when I came to this scene I went back to look at what I established she wore and stuck with it. I didn't consider the back strap so much though again -_- Being male it's not something I've dealt with much. I'll try to keep it in mind more in the future though!

@Peipei: I would say no sane person would wear a bra to bed, but when I was at DDD, I had to to keep the damn things out of my way. Big boobs are a menace, so I won't knock poor Fenny over her accursed endowment. ( "I'm just drawn this way." ) At least she doesn't have the gut and gravity issues going on. I'm sure super strength helps her hold them up.

Those cuts look painful! I'm surprised she wore a bra over that! Bra wearing is such a terrible habit, that's why I don't wear them any longer xD

tupapayon: She appreciates you looking out for her best interests. Did I make a pun? You have NO IDEA how creepy that bunny is!

UB: I guess she's just a victim of habit! And it'd been much tougher to keep the whole no actual nudity thing up if I'd done that!

Agreed… she should be topples… I'm thinking of her comfort, of course… and that's a creepy bunny…

Ouch. She must be some kind of masochist to put a bra on with that injury! Especially to sleep in. Her loose-fitting tops must all be in the wash. (Actually topless and on your side/stomach would be way the way to go.)