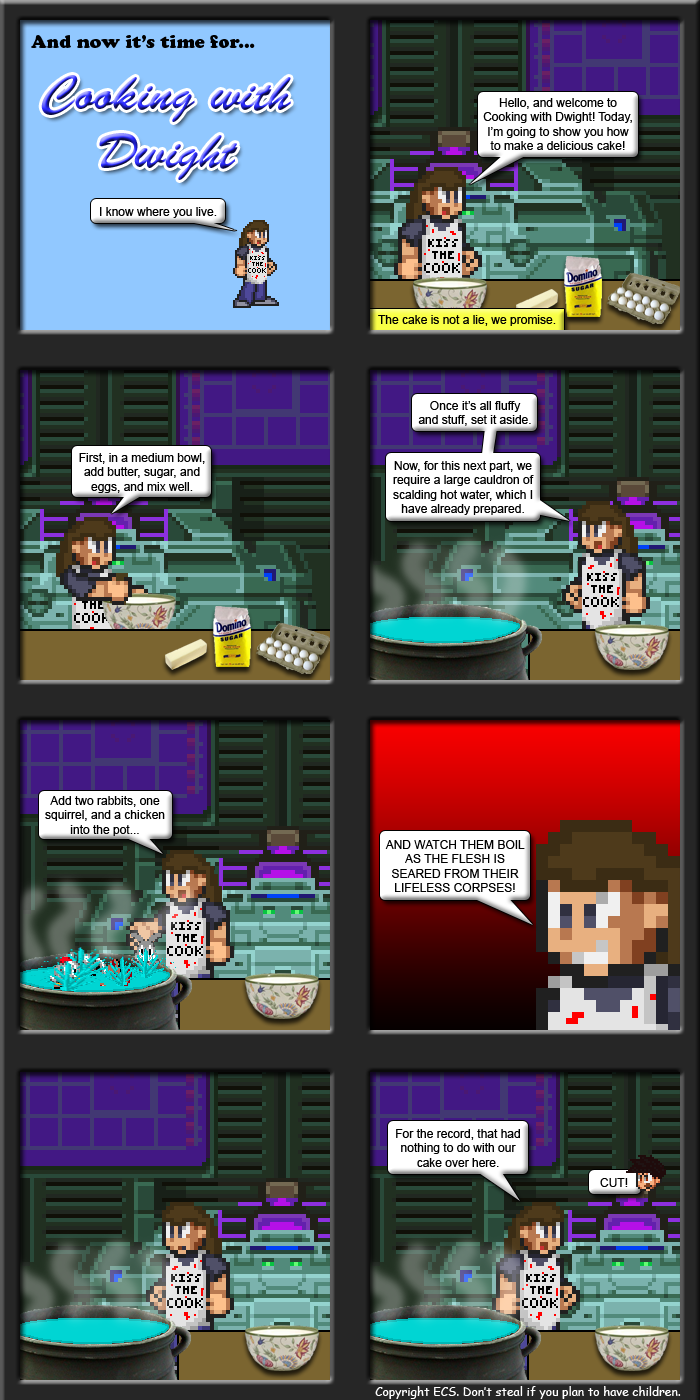 ECS #181 - Many animals were harmed in the making of this comic.

Some of you may have noticed that I've been skipping weeks, and you may take that as a sign that I'm slipping out of the whole comic-making business.

Actually, you'd be right. Yeah, I've had just about enough of it.

Without going into a whole emo LiveJournal cryfest about how much life sucks, I'm just going to say that making comics has ceased to be enjoyable, and has turned more into a chore for me. Thinking of ideas and implementing them has been a very painful process, so I've decided to stop torturing myself.

I dunno if I'm going to make it to #200, but I can assure you that there will be a Flash either way. I can't put a date on it, but I wouldn't hold my breath. But as you guys know, when I say I'm going to do a Flash, I deliver, even if it's late (unlike a certain someone we know).

So yeah, it's been fun and all that stuff.

Aw, that's a pity. I've certainly missed this update for some time, but it's still been one of my favourite sprite comics. Thanks for the cheap laughs.

@ cheese, that's more of a squeak than soonmme.

Naw, im just a random visitor at the 7-spade site and I thought id go gun ho on your comic :P

no i mean ly the hole quitting, emo, lazy thing

Soonmme doesn't know Japanese unlike this Japfag har :V Also, why so not telling me about this orso :[

srsly? you dont get my joke?

@cheesen8or: Nope, I'm not soonmme, but I know him. @Superpee: If by "being on the internet" you mean "AFK all the time, only to pop in at random times expecting to be filled in on what's happening", yes. Which I'm already doing.

It would be a bit sad to see this end. Atleast you'll still be on the internet, right? Right?

i laughed soooooooo much at the first slide, it was just sooooo random. You are awesome and i am sad to see you leave, but i just have to ask, are you by any chance soonmme?

I'm going to take a shot in the dark here and say that you're Dwight.