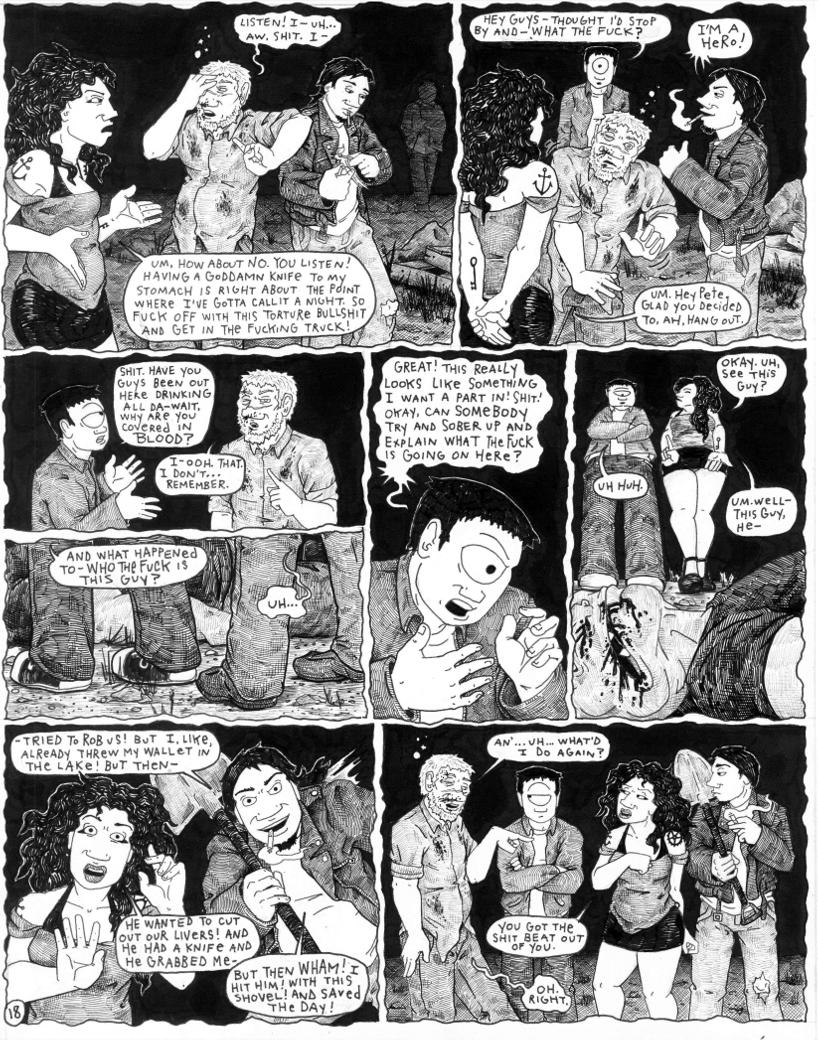 And… heeeeeere's Petey! Ya didn't think I was gonna leave him outta this mess, did ya? >:D

I really liked this. Sad about it's abandonment.

Good to hear you're back Hyena! No hurry and all but I'd definitely like to see more of the Hub again :)

Plan to post an "update" soon to alert folks that I'm alive and junk, and give some contact info (fb is the way to go, sadly- anyone wishing to keep up with my sordid life of booze, coffee, mardi gras floats, drawing, and booze can add me. I'm the only "Hyena Hell" out there, to my fucking knowledge.). As for getting back to the story, well- like Carl E sez it's been a challenge to get back into it after... well, let's say a bunch o' shit hit the fan and I was reeling from the impact for a good whiles. FYI to any and all what's interested, the rest of this particular issue is penciled and scripted, so that's a start. Just need to grab some microns and get back on the horse, so to speak.

Hyena!!!! Now I'm kicking myself for not seeing your post before posting mine... Glad you made it back - as you may have guessed, you've been missed!

Like others, I've been worried about Hyena, especially since she's a New Orleans denizen and got displaced by Katrina. I did a little online detective work, and it seems she has a Facebook account (Hyena Hall is her legal name, BTW). She's alive and well, back in N'awlins, working (at least) two jobs, and has someone in her life. So she's a bit busy for this comic... some things are more important. I didn't bother her (I'm not a facebook user, I peeked at it using my daughter's account), but she may like to hear from her fans, and who knows - maybe she'll start this back up again!

Hyena! Where are you? You don't have to come and apologise for not updating the comic. Just let us know you're alive, OK? Please?

This is still my favorite comic on here, and will probably stay, even if it never updates again

see you still have that ultradetail goin' on with your textures

With the lack of typical whining, asking for money or understanding.. I'm honestly worried about the artist. One year with no news... Thank you for the art.. Goodbye..

Poor Cutter, putting all that effort into distracting the bad guy and then have it described so negatively.

anything less than a year's just a haitus, folks. given the way things are today, i'm sure they're just swamped with staying afloat.

Got an account so I could comment. Sad to see you've disappeared for a while. Most of all, hope you're doing ok, Hyena. I adore your comic and characters.

Dear Hyena, Does any one out there know what happened to Hyena? If yes, please let us know. WE ALL MISS YOU HYENA! tommym

Was a nice comic.

Just chiming in to say that your fans miss you and wish you well. Happy new year.

Hey Hyena, just so you know I'm still reading and looking forward to more of The Hub. Hope you can continue again soon, your comic is awesome and it'd be shame for it to end here.

Hey, where have you gone?