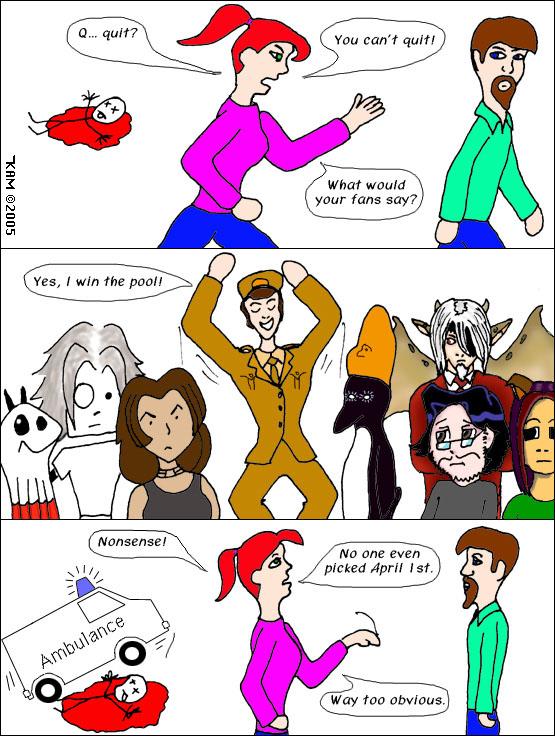 I actually thought up this storyline before I realized April Fools' Day was coming up, but once I realized that it was obvious when I had to start it. (The last cartoon was originally posted April 1, 2005.)

The second panel was supposed to be in a thought balloon, but I forgot & by the time I remembered I'd already colored some of the figures & adding the bubble effect would have messed up the figures (& my scanner had already cut one face half off).

I drew the middle two figures of panel two & then realized that I should use avatars & characters from the people who had commented, unfortunately I didn't have much time to gather references so apologies to those people I left out.

For those wondering who is who:
Sock Puppet Bob from The Adventures of Sock Puppet Bob & Sock Puppet Bob Tells It Like It Is
Glass from Short Bus Brothel
Mandy from Evil Wenches, Inc.
Brigadier General Callie Sullivan (moderator of the Stargate & MS3TK boards at NitCentral)
The Penguin Goaâ€™uld (a running gag at Nitcentral)
Silas from Earthbound
Brick from AACMAW
Tony from Fourth Semester