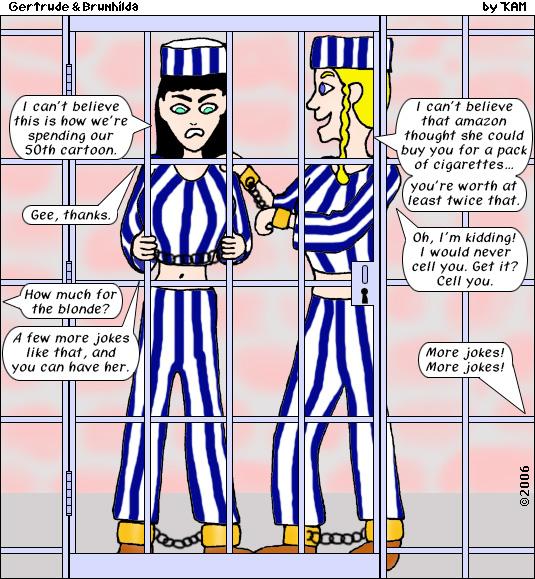 For some odd reason I had decided to try to do something special for the 50th when writing the script, but the storyline didn't give me many options, so I thought of having the girls chained to the wall like the Spook in The Wizard of Id.

The punchline was meh, but it seemed okay at the time.

One I liked was unfortunately too similar to Friday's cartoon & if I'm going to repeat jokes I should at least do them a couple of months apart. ;-)

My favorite part of this has to be the prison uniforms. They look so cute in them! Besides it gets so boring drawing the same things over & over & over & Ã¢â‚¬Â¦ Aaaaaaaaaaaa! Will this story never end??? ;-) (Yes, October 20.)

Ah, well, in Trunk news there is a Trunk constellation over at The Lost Battle Fortress

Technically it's not the trunk itself in my comic, but a constellation resembling it. The funny things I can do with stars... :)

A blonde with sense of humor for free?!? Sounds like a bargain!

MM - It's fine with me if you want to use it more than once. killerfurby - Glad you liked it. Lonnehart - Is it that unusual? Some people go out for a special occassion, get drunk, get arrested & wind up in the drunk tank. ;-)

Hey does that mean I can have the trunk back over to MM a second time? I thought it was one to a customer!

Owch... what a way to spend a special occasion. O_O