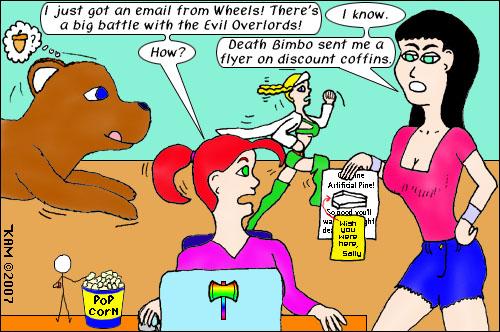 This is it! The Final Battle against the EOU has started! It's estimated to run 3 & a half years after which we lynch Hogan for starting the Crossover Wars. (But don't tell him, it's a secret. ;-)

This is part of the Crossover Wars

Because Sally cares so very much :)

I know that Ad! Fred's Discount Coffin Warehouse with additional dicounts for those who buy befroe they die. :D

Bring on the coffins! There will be plenty for everyone! ... hey, what's with that rope?

shame I made a comic too late to join, ah well. nice jokes

Yes true. I forgot how to do a hangmans knot!