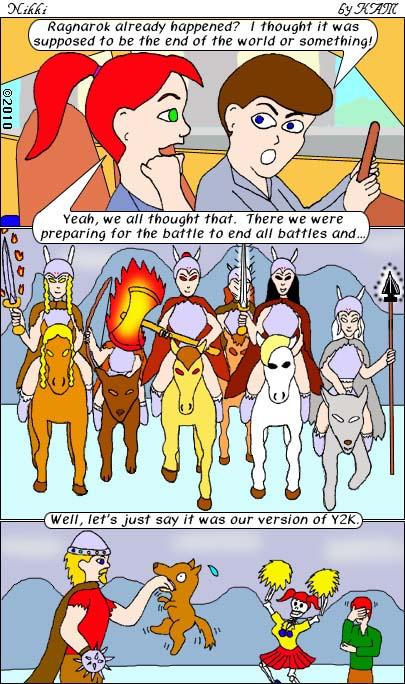 Sorry it's so late!

For the flashback I figured the girls would wear fancy armor for Ragnarok, but then I remembered how my readers practically lynched me for giving the girls full armor for the Crossover Wars final battle & decided to compromise because I fear you all.

Well, at least as full valkyries they have better resistance to cold & injury.

In the final panel is Tyr (god of war), Garm (so cute), Hela & Loki (before he started using his silhouette appearance).

For those wanting more information about Ragnarok in The KAMics (does not apply to Ragnarok in other comics): the fimbulwinter was nowhere near as cool as the global cooling fanatics said it would be; Hela, after years in Niffleheim surrounded by the dead went slightly crazy; the armies of the dead just laid there decomposing; Fenris decided that domestication wasn't that bad after all (the lazy, layabout shirker); Jormangund had gotten drunk the night before & overslept deciding the whole thing wasn't worth getting up for; the giants looked at the odds & decided to play Cleveland instead (whoops! wrong giants ;-).

Glad you all liked it! :-) Darius - Fenris isn't in this pic. That's Garm. According to the Norse myth books I have he's a different entity than Fenris (Fenrir). Ozmandious - Thanks! :-D Hogan - Thanks, I try to amuse! :-D

Got to hand it to you... one of the funniest tales of Ragnarok I can think of :D

I love your take on Hela