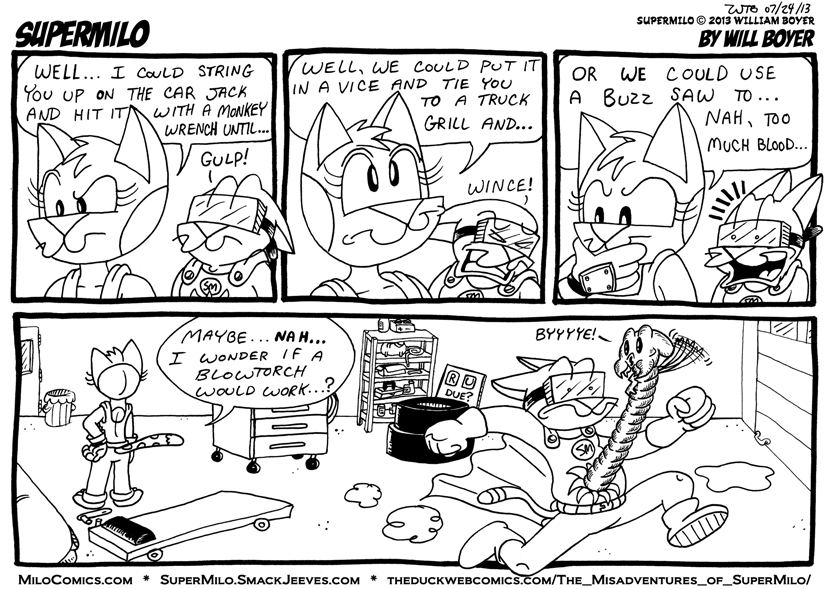 Hey, everyone!
Sorry I disappeared a couple of years ago! We're now at MiloComics.com!
Here's an update: The older material will run here until we're caught up. I am currently on a sabbatical, resting from the Space Worm chapter and overworking myself, as well as getting ready to possibly say “Adios!” to SuperMilo for a while so that I can work for my new employer, Charlton Neo, on their webcomic “Hip Hop,” written by Dan Johnson. It's creator owned, so technically I am also an owner of this awesome collaboration. (I am only the Penciler; we also have an inker and a colorist). There are now 4 SuperMilo issues out, which includes a 48 page black and white trade containing the entire Space Worm chapter plus 3 extra pages to the story. Meanwhile, as I said, I'm now an employee of Charlton Neo Comics as the Penciler on Hip Hop, a PG rated funny animal comic strip appearing on their Pix-C pay-$1-per-month webcomics division. I was on a con circuit with Charlton Neo this summer. My last Con was Heroes Con June 19th-21st. Speaking of which, thanks for everyone who donated to help me pay for printing books for that MASSIVE con! I'll let everyone know of any future conventions. If you'd like to donate to our future needs, you can here at my Patreon: https://www.patreon.com/milocomics