The Story of Luigi 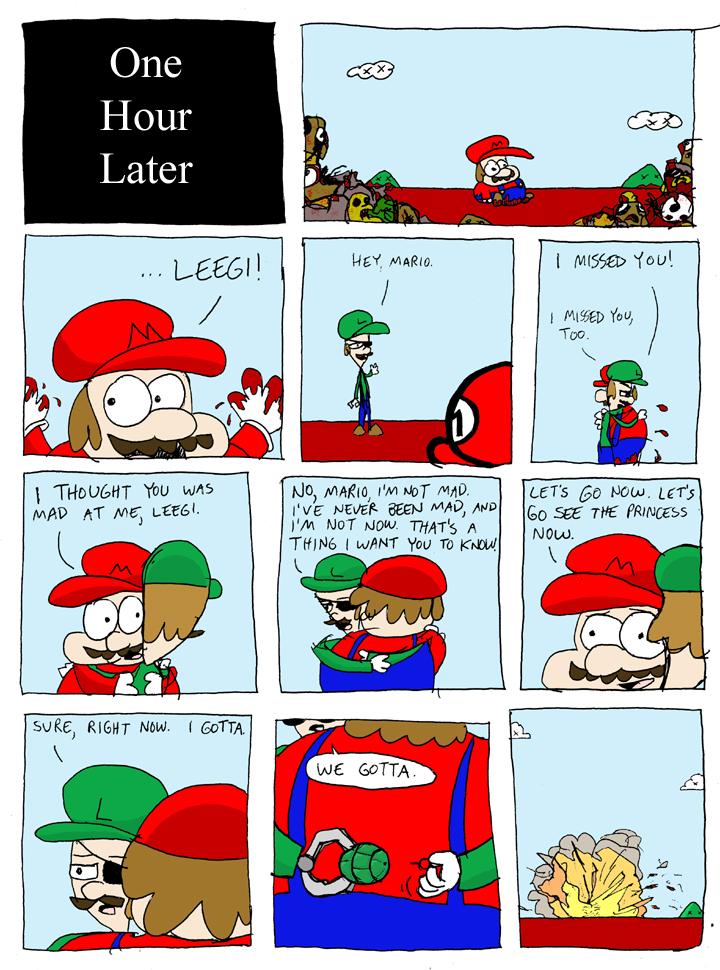 Hmph. Well, just one more completed comic under your belt, I suppose. Rather short, but hey, quality over quantity.

HEY!.. seriously, pick this back up or do something new (i don't know metal gear enough to really get into your other one, if that's current.). this was one of the probably 3 comics i actually looked forward to reading about on here. i printed this out to show to people for shit's sake!! ..ok, sorry.. could just really use some leegi... .

RAAAAAAAAAAAAAWK read thourgh the whole thing, loved it, the whole killing the koopaa giving him a flower and a lot of other sqences rmeinded me of johnny the hommicdal maniac. you sir win at makeing comics.

what a bunch of bitches

Wow,so the only one who still lived is princess peach and the toads in the castle(Maybe).That was a sad ending,at least they died together.....as brothers.

Damn, and thought I was going to get a new comic to read. Stupid endings and stuff. Well, I'll just get cracking on the archives.

best ending to anything ever. including my own life, which will hopefully be soon so i can join mario and leegi in.. hell i guess. thoroughly enjoyable comic, sir. the color here is really nice, but i think this is one comic that benefits from the simplicity of pen on notebook. well done.

Now it's overrrrrr!? ;_; I likes this one the best. Now you should go and color and or redo the old ones! (please?)

This is one of the best you ever made. C:/ a sad man with a hat!

The end? :'( 'Twas a great comic man, hope to see another comic from ya' soon! *Cough MIGHT I SUGGEST A ZELDA COMIC cough cough*