The Webcomic Review Comic On The Web 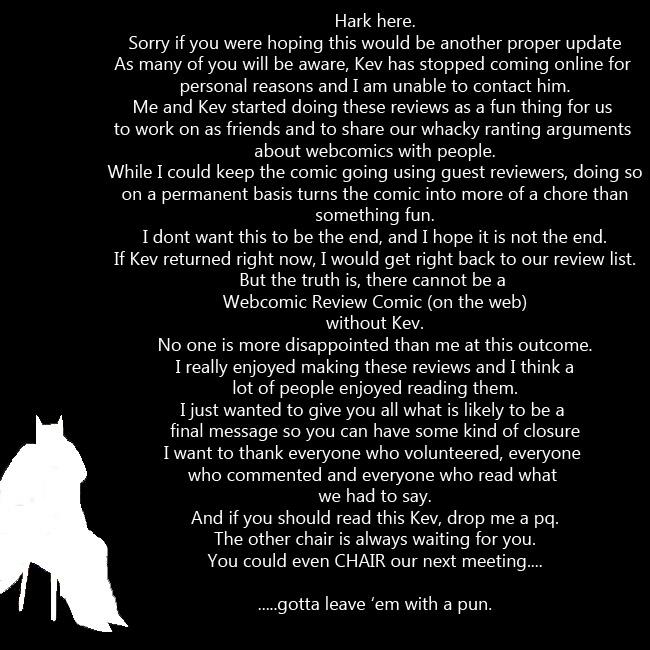 A Message From Hark.

Ifelldownthestairs is back.... couls this mean the return of this comics?

Hey. Just wanted to say I'll miss the reviews you guys did. I try to check in every now and then. Hope you two are doing well!

I saw this coming, but that doesn't make it less disappointing. I'm going to miss this thing.

Hey, these things happen. And Hark's decision is pretty professional, wanting to keep it with Kev. Hope Kev is healthy and just busy, though.

Sorry to see it end. Understandable though, some of us suffer from internet overload I guess. Had fun reading the reviews. It was nice to see someone be brutally honest for a change.

Shame to see this go. Hope KeV is ok

Sad to see it go. I'd come to this comic hoping to get some exposure for mine (as I'm sure all the people who signed up did), but I ended up exposing myself to a lot of different artists and seeing much more of the community than I would have. Between this comic and the Drunk Duck Awards, I've felt much more like a member of a club than someone working in isolation. I'll be keeping an eye out for the next project. Meantime, thanks for all the fish... er, puns.

Did I accidentally kill this comic forever by summoning Lucifer in the forum? Whoops.

Hmm. I'm gonna try an experiment. The last post in the Forum was by BffSatan. And as Chernobog mentioned, the postcount was 666. So, don't touch it! Leave it in tribute! (now... I wonder how long it's gonna last).

I still suspect that some of the Mob Ties people got Kev... In all seriousness though, I'm gonna miss this. It was good while it lasted and it is quite possible that it could happen again, who knows? Overall though, I just hope Kev is okay.

Also, kinda amused the postcount on your forum is left at '666' right now.

Bugger. I wonder what happened to the lad? These were arguably fun. Anyway, 'At The Movies' was never the same once Siskel left, so I understand.

I guess it's best you stop it than do it without putting your heart in it. It was good while it lasted

Well, this suck. I really enjoyed those reviews.