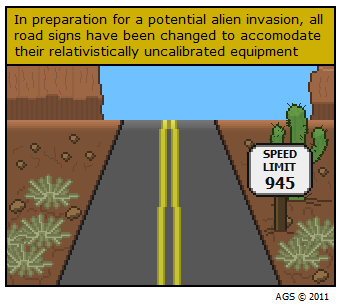 To all those confused by the explanation - the shown speed limit includes the rotation of the Earth as well.

And that's what I'm getting at, maybe these so-called “alien invasions,” are a result of disgruntled vacationers unhappy with the discrepancies from their travel brochures.  Instead of meeting them with tanks, we should be exercising the gracious hospitality that any gracious host would be expected to!  There may be much fewer instances that have the aliens running for their laser-gun compartments.

Bonus points for anyone that can correctly guess the general vicinity that the shown speed limit was calculated for.

@Luccia Taking into consideration the motion of the Earth, they actually can! @ayesinback Very close! Well, they're close to the same latitude - it's actually the Mojave Desert. And you know what, I didn't even consider the language barrier. Now we'll really have to create some sort of universal language of some sort!

salt flats? any how - why do you think aliens will be able to read our traffic signs - in English? I think we need to get some intergalactic iconic signs. (now you've got me thinking again)

Wow! Can cars even go that fast?