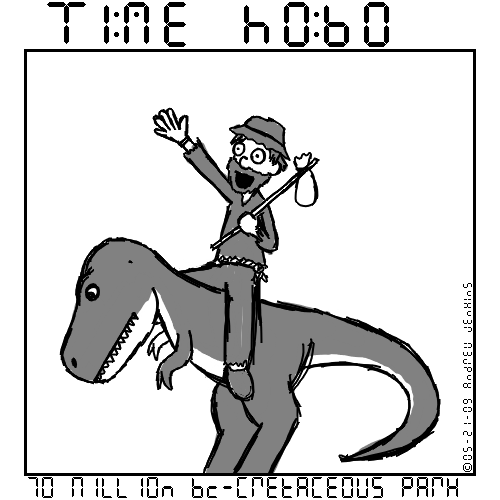 So, I finally broke down and did it. I thought about it for a long time, and finally I decided, “Screw it, I'll do it.”

I bring you, Time Hobo. It was a wacky idea, and I don't really take it very seriously, so the comics will be updated sporadically as I get new ideas. There is no plot (unlike Melody & Macabre, and… arguably, EpicSaga), and they're one-shot images.

Originally, I had a deep-rooted plot, where he was once a brilliant scientist who lost his family and developed his time travel device, then in a mistake involving the paradox loop of saving them (thus causing him to not need to make it in the first place), he lost his mind. Oh, and his family.

Unfortuantely, I wanted this to be a very lighthearted series involving an odd little homeless fellow simply just jumping around and having adventures in time, riding a timeline like a train.

I presume he picked up the watch in the trash at a Timex research facility, where such a scientist did all that stuff I just mentioned, then realized it was useless.

At any rate, hooray! First comic! It's not that great, but these are really just quick sketches, and partially intended for him to have been the one drawing. Which I use as my explanation for my own sucky art. That's supposed to be a T-Rex, though it's a bit small, so… maybe it's an adolescent.