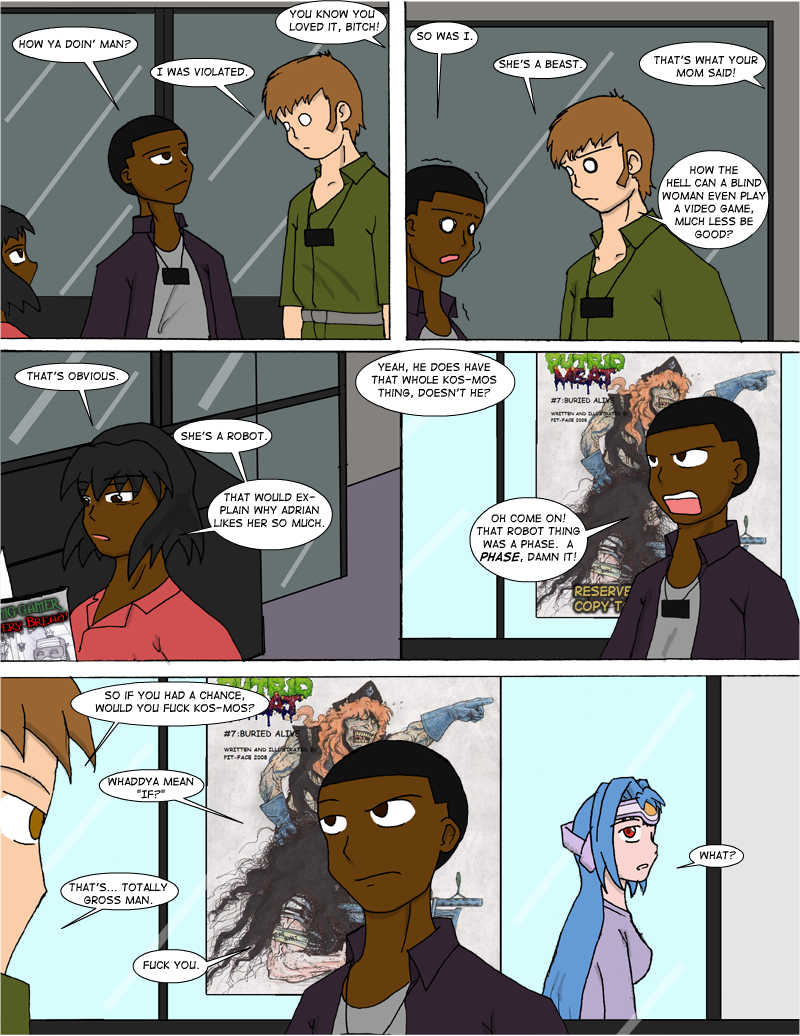 Well it's a day late (never mind the fact that I've never officially said “updates on Fridays!” or anything like that. This page was, like the others, a pain in the ass, but in the end it turned out okay. There's two cameos in this one; Putrid meat gets a wall poster and Mystery Bread is on the magazine cover.

But yeah. You thought we just took weapons out of video games? Kos-mos is “technically” a weapon, or she was in the first game. As for the whole robot thing… well yeah that's the truth, and we're going to leave it at that.

hey! thanks for the PM shout out!

LOL FUNNY PAGE. Hey PUTRID MEAT is in the background! My fav comic!

Soooo? This is funny and all, but I'm so confused! Is this supposed to be your daydreaming while on the job or what? And how CAN a blind person kick ass in a video game anyway?

I would totally play a Putrid Meat game, but I think I wouldn't be able to eat before or after. =D

hey robots need love too, I am the one to give them it.

Am I the only one who would be a bit afraid to play a Putrid Meat computer game? It would make grand theft auto and Postal look like an evening with Rupert Bear!

Yep, noticed Putrid Meat poster right off. The story is really interesting. Waiting to see if the blind girl is the granddaughter of Pinball Wizard, by the Who.haha

Kos-mos actually changed looks with every subsequent game in the Xenosaga series; each game had a new art director and so the look of the characters, especially Kos-Mos took a drastic design. I liked the character design of the first one, but then after they changed, I lost interest in the series itself.

I just checked what kos mos looks like...lucky I did as the talk of robots made me imagine robbie the robot from lost in space....