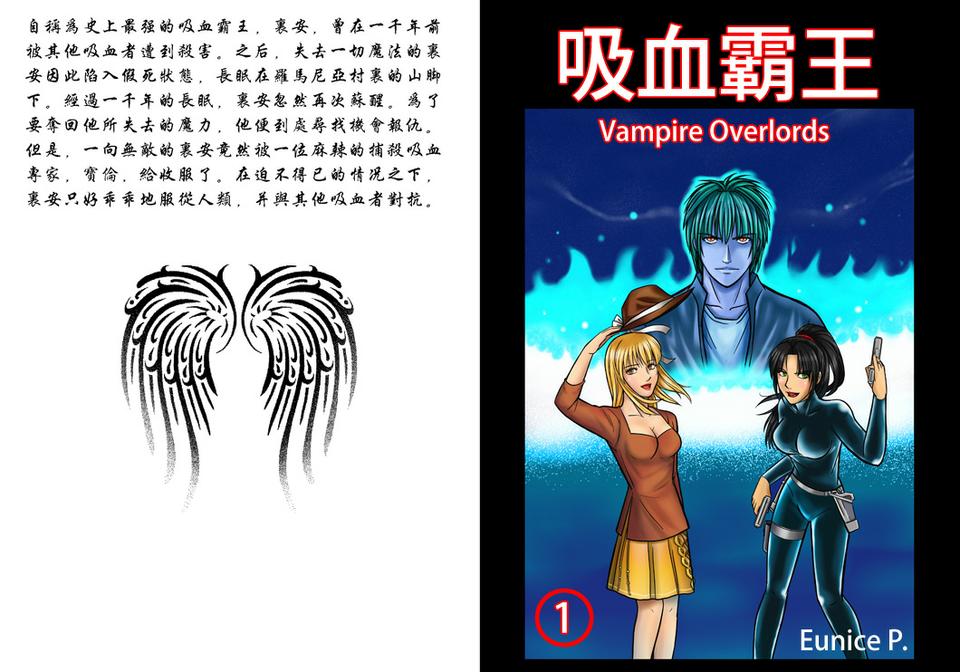 This will be the cover for the comic once it gets published. My apologies for taking so long to post up a drawing as Iâ€™m still quite amateur in my coloring skills. I wished I have taken up some art classes to at least improve my coloring skill and speed. Anyway, please ignore the uncreative background design as I run out of ideas and decided dabbing a few colors here and there for the background. Not a serious attempt, but itâ€™s better than an empty background.

When I left this unfinished sketch on my table, my mom noticed one of the female characters and said with a surprised expression, â€œNii! (Sometimes, thatâ€™s how my mom calls me.) Why does the girl in your drawing have such big boobies?â€

â€œActually, Iâ€™ve seen comics with females having bigger boobies than this. Well, you know comics with sexy characters sell better,â€ I replied jokingly.

â€œErrâ€¦ but most comics do that. Besides, this comic I do is to be targeted for older readers.â€

And so, I reduced the size of the boobies slightly for the female character on the right. Anyway, this comic will not contain any sex scenes but might probably contain a few really violent scenes.

Your comics are really beautiful. I admire your art and the characters you do look great. Keep it up!

I think this comic is beautiful in Chinese. If you really wanted you could provide the translation in your posts, but it's entirely up to you. Personally I think it's a good call just to leave the pages as they are.

Hahaha, they're still quite large titties ^^ Your mum was probably right. Although it's usually best to force familly away from art I find. I love the assassing grea anyway. I should have done something likat that.

Ah, Bitto is translating...nevermind then =D

what an interesting conversation THAT was...boobies. At times like this, I wish I were Chinese.

I will be off to Singapore for 2 weeks for important issues. In other words, there won't be any comic updates for 2 weeks. See ya all 2 weeks later.

Well damn, that is a pretty awesome looking cover right there ^^

Dude, you draw the best women ever. I can't even read this comic, but I'm simply sucked in by the art.

Basically I think the Artworks is brilliant, & I think the females look great. (Even though you mentioned that you changed it). Don't worry about what your mother says,,it's what works for you. Your drawing techniques is very captivating! Hope this work out with the publishers.. ~M~ v~~~~v

XD "Fussy"? Nah, the appropriate word is "hot" or "sexy". Hmm... Maybe that word was used as fussy for the older generations. Oh yeah, just a note, "Li An" is a common Chinese word for "Ryan". But I solute you and your dad for the translation. ;) Oh yeah, I'm planning to come over to Singapore probably for a chance to do a Master Degree there. So, I might probably find a way to market my book there if there's a possibility.

Okay, I've finally got the translations =D Sorry to keep anyone waiting: "A thousand years ago, the vampire overlord said to be the most powerful in history, Li An, was defeated by the other vampires. Stripped of all his powers, Li An fell into a deep sleep at the foot of a mountain in a Romanian village. A thousand years later, Li An suddenly woke up. In order to retrieve his lost powers, Li An went searching throughout the land for a chance for revenge. However, the once almighty Li An was caught by a fussy vampire hunter, Bao Lun. Under forced circumstances, Li An now has to obey humans, and fight against other vampires." I'm not sure about the fussy part. My dad said the words meant fussy, or highly critical...

Ugh. The chinese scares me x_X Since there's a few words I can't read in just about every sentence, I'll put up the translation once I get my dad to confirm the words =D But one of the sentence says something about someone trying to get back his lost 'magic' =D I like the cover! I'm definately gonna buy the book if it gets published! (in Singapore) =D

I wish I could understand what that says... That doesn't sop it being great artwork!!

lol So your mother was worried about the boobs. Jeez I guess that happens. Either way, nice job and I wish you luck on getting published.