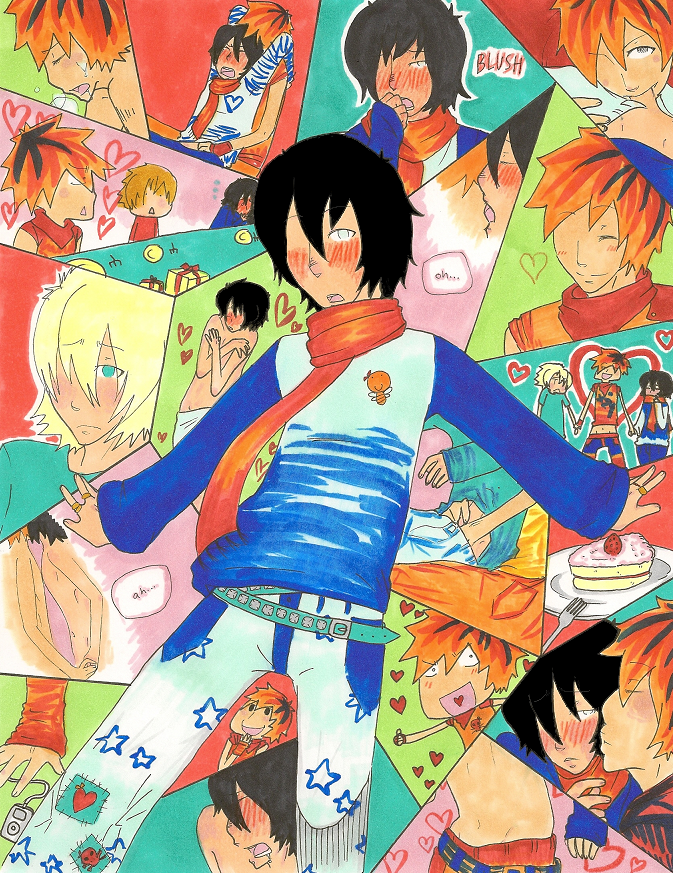 I call this peice, “The Beast” cause it took so long and is so full of color!

And with this lovely peice we saw good-bye to what has to be my most succesful yaoi/shouin-ai I've ever made!

Thank you all so much! I can't thank you enough!

I also wanted to show you where I got the idea for the main fashion of WIRES:

Hee hee, those are my favorite socks I love them!
I wanted to show you the shirt that inspired Mark's sort of bandana shirt cause I have one just like it but it's black!

Also I was gonna do all the extras but I got really lazy! Maybe I'll put them at the end of WIRES 2 or in the book! *if I ever get around to doing it!*

And so, with a heavy heart, full of love…we say goodbye to WIRES.

But with it's end, we can feel a fresh begining of WIRES 2, which is going very well right now. If you haven't checked it out, please do, it updates everyday, just like WIRES did. And still has Mark and Lin in there.

And so, I cannot thank you all enough for the support and wonderful words.

You truly, are what made this story great.

Your colors are amazing*

I read Wires 2 before I read this, and then I got to the extra chapter that was all Lin and Mark and I was like: "WAIT! I gotta read Wires first." So I did, and I have to say that I like Wasso and David more than Linder and Mark (Even if Linder is the absolute most adorable thing I have ever seen in my life). But that may just be because I read Wires 2. Anyways, LOVE IT.

This is always going to be my favorite comic. . .

Oh man, Jess... I'm so glad I came back and read this~ It's so freaking adorable~

Do you colour them with markers? Looks this way. Your art is great, but you could have sewn your socks, young lady ;)

FFFFFFFFF, I LOVE HOW THE LITTLE GRINNING MARK IS ALL RIGHT UNDER LIN'S CROTCH AHHHHHAHAHA

Thanks for critting old art....?

AHA!! Read it all in one sitting! SO AWESOME! The guys were so cool! T.T too bad they are going for the other team.. oh well XD SO AWESOME BUDDY!!!

Much wuv. Glad I read this one too. Soooo cute. n.n

Oh my god, did I never comment this at the end?? What's wrong with me?? I love this story and what is of WIRES2, yet I didn't comment the end of this one... I sorry!! Lol. I love WIRES and WIRES 2!! They are absolutely amazing!!

I can't believe it's been an entire month since WIRES ended. It feels so much longer! *is deprived of WIRES, but overly-satisfied with WIRES2* Even though it's been a month, I still love you WIRES!!!!

I can't believe it's been an entire month since WIRES ended. It feels so much longer! *is deprived of WIRES, but overly-satisfied with WIRES2* Even though it's been a month, I still love you WIRES!!!!

I'm not a fan of yaoi. I don't mind shonen-ai, but yaoi was always too much for me. I always found that they put too much focus on... other things, than the story and characters themselves. HOWEVER. These two characters were absolutely adorable and there was just no way I couldn't love them. The art was fantastic and the stories were pretty good for one shot manga. :) I really liked this and I'm definitely going to read WIRES2! I guess I'm a fan. :D

I just read through this whole comic at once. Cuteness overdose! Lets head over to number two.

What a Gorgeous piece of art!!! Amazing!! love those socks too!!lol

Wow! This whole thing has been a great read! MARK'S HAAAIR AND CLOTHES ARE SO AWESOME HE'S AWESOME.

*Sniff* Goodbye, Wires. Nalyd'll add you to his pile of Fallen webcomics.