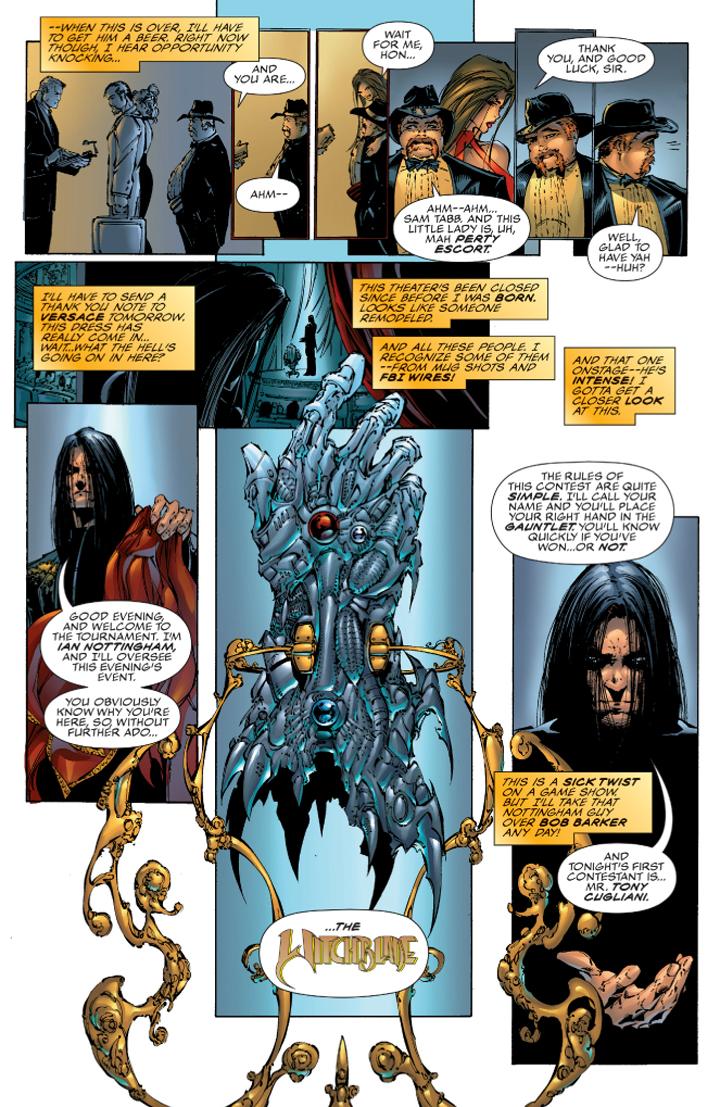 Every day in this space a new page from this trade paperback will go up treating fans to issue #1 of Witchblade, created by Marc Silvestri, David Wohl, Michael Turner and Brian Haberlin. To view the Witchblade page on the Top Cow site go to:

for more info go to www.topcow.com.
To purchase the Witchblade Compendium vol. I trade paperback (collecting issues #1-#50!) ask your retailer at your local comics store or check out www.topcowstore.com

How convenient, never saw Witch Blade from Ist episode...Seen the Anime Witch Blade though...it's good but it has a sad ending...

so no more updates to this? :(

Hmm...Does anyone know if this is the end of issue #1? If so, that would explain why the updates stopped.

i feel lied to.

Commonsense- This comic was done by Mike Turner, its been in print for several years, even had a TV show made about it. I'm sure he'll continue working, but he's no longer working on Witchblade to my knowledge. Nor does he visit DD to my knowledge.

I emailed TopCow customer service about the problem. A signal probably just got crossed somewhere. Hopefully the updates will start up again.

yeah, there about 10 pages behind what they said they'd do.

What a wide variety of wrong assumptions... Drunk duck has been BOUGHT by a comic publisher. They are uploading parts of their comics, such as witchblade (which are all available in print). So, yes its available in print format. No, this has nothing to do with a slump. Yes, there are other comics like that now. No, this isn't pirated.

Uh, this stopped updating like ten days ago. Wasn't it supposed to include the whol first paperback?

O.O Your art just blew me away. Keep up the good work!

I gotta go digging for some old issues now. This is just great!!

I too was surprised to see Witchblade on here. I never got a chance to read the comic before, but I liked the TV show when it was on. I do find the pages a bit large for a Webcomic, but then it is the print comic posted online so I can understand it being large so the text is readable.

The artwork is so awesome~

Of all things to end up here... I never ONCE expected Witchblade... ...friggin' awesome...

Ok listen I want to know something are these comics actually sold in real life in like comic stores?

Now this, this is pretty unusual, at least, for a comic company. I suppose that perhaps Witchblade's sales were in a bit of a slump. In any case, glad to see that their putting it up as a web comic (free advertising? Hm...) Oh, and Knuckles? That sounded like a botched Howard the Duck reference. Well, a reference to the relatively recent comic.