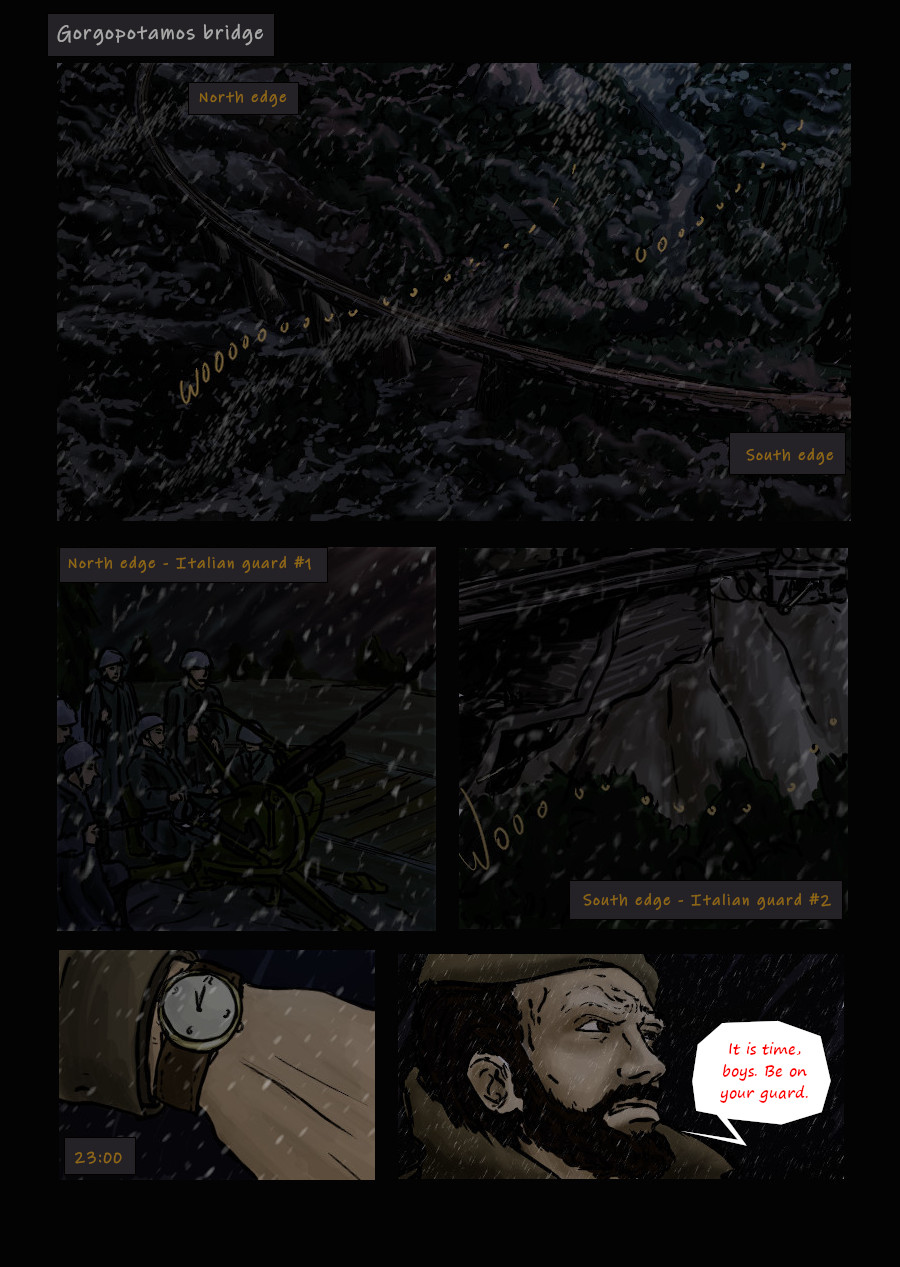 And so it begins!

The attack and sabotage of the Gorgopotamos bridge took place on November 25th, at 23:00. That was “time zero” for the entire operation.

All accounts make a point of how the weather was absolutely ghastly, complete with strong winds and a snowstorm. It was also …without moonlight (sic): they mention how it was so dark that they could barely see each other and the other teams.

I have mase a separate post on what the plan was for my patrons! Zervas, Velouhiotis, and Myers compiled it together, each of them contributing their expertise for different phases of the operation and how the teams were organized. What I’ll say here is that they had 4 hours’ time window for the entire thing, and each team had 15 minutes to do what they were assigned to do, or, per Velouhiotis’ words, they would begin losing.

Both guard posts were manned by Italian troops, by the way. Technically, Gorgopotamos was in their occupied territory and in essence they were the German occupiers’ ordinances…

Do you recognize Eddie Myers in that last panel? He has a beard now, but still no eyebrows. XD

Next update will be on Monday, December 5th! But if you’re my patron you can see it right now along with a lot of extras!

Nov 25th and snow in Greece? Yesterday we had Nov 20 and the first snow fell in Oslo.

Yes! Keep in mind that this is basically the mountains, and in the regions where it does snow yearly. During heavy winters, those areas can get snow in November, easy. And 1941 and 1942 were very heavy winters. https://greecetravelideas.com/does-it-snow-in-greece/

Wikipedia mentions that the total number of Germans present was a grand total of five. Interesting that this was two weeks after the Second Battle of El Alamein where the Germans and especially the Italians were defeated. As Churchill said not the beginning of the end but the end of the beginning.

Well, I suppose there were Germans in the train. But I'll be spoiling stuff again. XD

From the article I got the impression that the Germans were not part of the garrison but just some troops passing through and contributed nothing except being there.

No, that isn't right. According to pretty much all my sources of people that were there (including Myers and Woodhouse) the two garrissons were 80 (south) + 30 (north) Italians and no Germans. The idea was that the garissons were more than enough to guard a hard-to-reach bridge and that it was super defensible while the resistance had little means. Even SOE HQ thought it was a suicide mission Myers insisted was viable.

Pining for the good old 19th century when no one did anything after sunset even in war.

Like crossing the Delaware and first battle of Trenton in 1776? Forced night marches were pretty common in the ACW. Dawn attacks were a wonderful thing if you could pull off the night marches.

In the Balkans that was not a thing even in the 19th century. XD