Origin
Ben Wyndham was a teen genius (he's now in his early 20s) and a bit of a scientific superstar who got rich off his patents by the age of 12.  He used his wealth to indulge his private fascination for the martial arts, training with masters from around the world, obsessed with discovering the elusive formula for martial arts perfection.  Despite his best efforts and a high degree of natural aptitude, he found himself unable to break martial arts mastery down into a scientific formula.

Until one day, he was visiting his sifu in China for his monthly lesson and always ineffectual attempt to defeat sifu in hand-to-hand.  He watched and waited while sifu graciously assisted in training a group of novices.  Sifu had one student come at him to demonstrate defensive posture.  The student tripped and sprawled flailing, striking sifu and knocking him down as he fell.  Ben laughed and laughed and laughed and, as the koans say: at that moment Ben was enlightened.  Profoundly absorbing the lesson, Ben became the embodiment of randomness, his moves equal parts unpredictable and implausible.

In my head, in his first adventure leading up to him donning the costume he would've faced off against Jack-of-all-Trades from the Delegation of Hurt. Jack would've been responsible for the death of Prudence's former partner Patience.  Jack would have been unable to copy Chaos's combat style because it's completely inconsistent from moment to moment.

Costume: As the hero Chaos he wears a costume composed of a biopolymers of his own design across which bright colours constantly flow and morph and shift (imagine if Rorschach's mask was made of bright clashing colours and covered his entire body).  The lower arms and legs are dark.  Combined with how distracting the constantly changing torso is, this makes his limbs harder to notice and counter at night The biopolymer provides more protection than Kevlar.

Prudence
Prudence is Chaos's base-command and performs an intelligence function. She is the surviving half of the heroic once-duo Prudence and Patience and was saved by Chaos in the encounter that left Patience dead.
Tales of the unpredictable Chaos
last edited on Feb. 11, 2014 11:50PM
link
cdmalcolm1 at 3:27PM, Dec. 11, 2014

(online) posts: 779 joined: 1-13-2007
I'm redesigning Chaos.  Ben is cool but I found myself falling into some cliches and wanted to take the character in a different direction.  Think of Ana as a modern age reboot of the golden/silver age character (Ben will not have existed in the HUniverse proper).

Origin, ‘powers’ and costume are still essentially the same.  Here's a picture of her in costume and in her civilian identity.  Note that her fashion varies but she prefers to wear bright colours and clothes which give her freedom to move.  So you won't find her wearing pencil skirts, high heels etc.
Presenting: Ana Morena, the new Chaos
(Thanks to SenshiStock on DeviantArt for the reference pic I used to draw this pose). 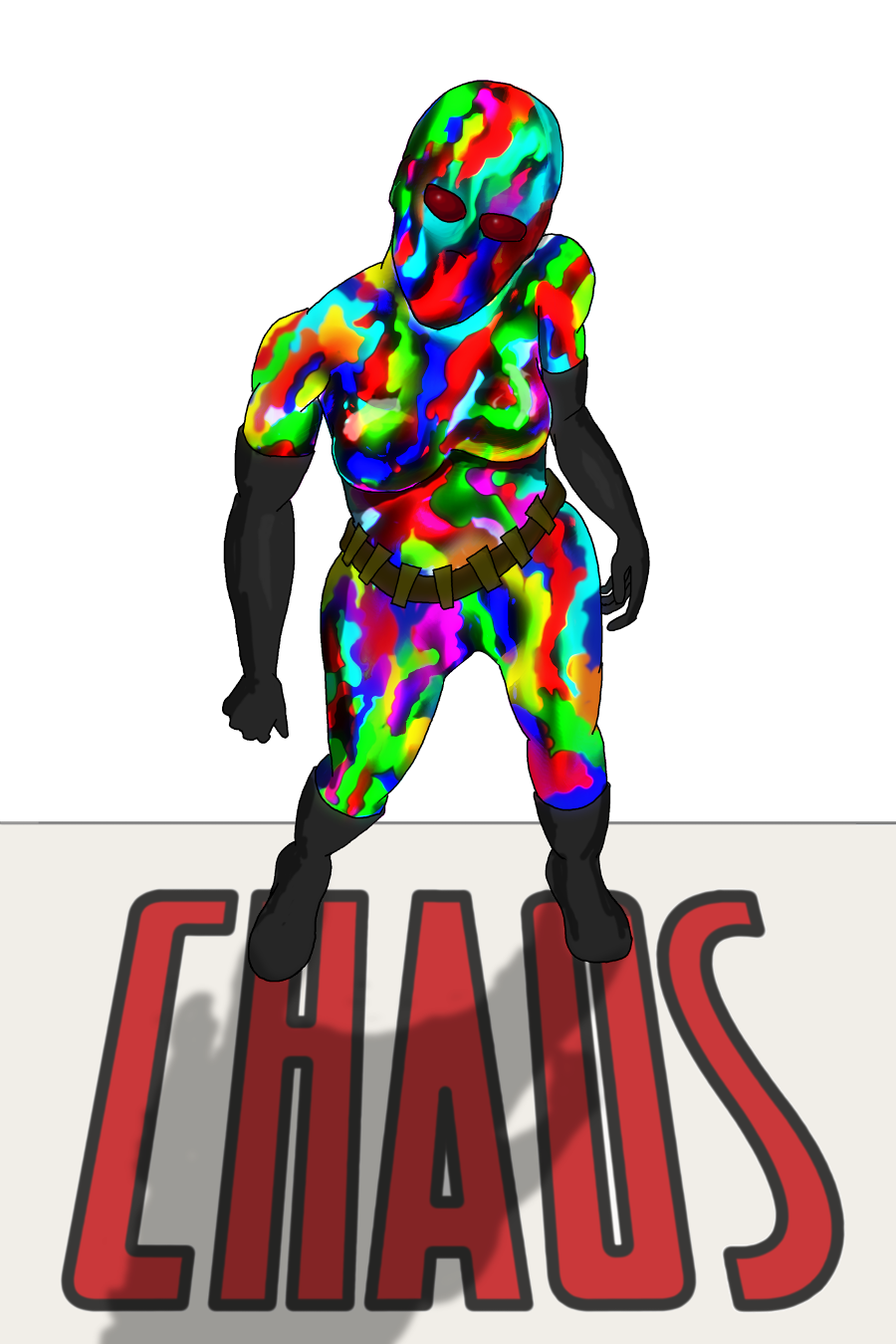 (online) posts: 435 joined: 8-21-2012
Nice design for her. I can't wait to draw her in the up coming issue of SolarCell. (Really I can't wait for her to kick ass and take names). As you already know, I made a few changes to her parts in the story. She will be in her civilian look as well as Sparkle, Astral, RoofRat, SolarCell, Ballista, Widow, Samantha the purple Matate and Jill of all trades. I'm guessing this will be the first appareace of a few people in that segment. I'm hoping this will people reading and updating pages again. As of right now (07272015), I'm working on three different pages. SolarCell, HA and the Titan story. The HA I'm going to do first and then the Titan story. Solarcell's story can not move until HA story moves along. But keep an eye out for Solarcell's story. I have a lot of guests stars coming through.
link
irrevenant at 6:24AM, July 29, 2015

(online) posts: 779 joined: 1-13-2007
Sounds good. I didn't think of this earlier but be aware that this is her secret identity so if she's going to be sniffing around supervillains out of costume she'll at least wear some sort of disguise,  even if it's just dark glasses and a hat or wig. (A wig might be cool -  it could come off in a bad guy's hand and they'd be all WTF!? o_O).  Her civilian identity is fairly famous (she's a billionaire) so she'd take some precautions.

cdmalcolm1 wrote:
Nice design for her. I can't wait to draw her in the up coming issue of SolarCell. (Really I can't wait for her to kick ass and take names). As you already know, I made a few changes to her parts in the story. She will be in her civilian look as well as Sparkle, Astral, RoofRat, SolarCell, Ballista, Widow, Samantha the purple Matate and Jill of all trades. I'm guessing this will be the first appareace of a few people in that segment.

(online) posts: 435 joined: 8-21-2012
I decided to keep chaos identity concealed during this fight. The reader will know who she is but the story characters will not. I think it works better for the story.


Thanks for letting me use your character for my story.
link
Your ad here, right now