(online) posts: 8 joined: 2-6-2011
This isn't my first rodeo here, but I figured I'd finally introduce myself on the forum. I'm Rob, been making comics on here (and other sites) for a little over ten years now. I've done everything from animal comics to art comics, while also dabbling in literary short-stories and game-design.

I can be pretty shy though. We've shuffled our feet so much that the comic is somewhat outdated, but the artist and I have decided to bite the bullet and finally release our comic, Coquin, on the site. 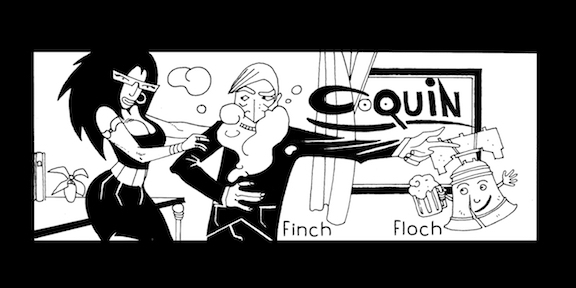 Coquin is a newspaper gag-strip style of comic about a brash French journalist, a gentlemanly British genie, and a cast of unusual neighbors living in the American city of Philadelphia. Although (somewhat) topical and inspired by hot-button political topics, Coquin is a character-based story about getting along despite different nationalities and beliefs. It's less Republican vs Democrat and more about finding a balance between traditional and radical schools of thought.

The artist (Gregory Floch) and I hope you enjoy our goofy brand of humor. It's a pleasure to overcome my stage fright and meet you all.
Check out David and the Dark and Supercosmic!
last edited on Oct. 23, 2019 10:17AM
link
Your ad here, right now