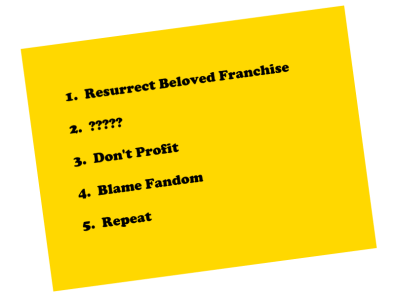 It's a strange thing in recent years that following the behind-the-scenes craziness and
mixed-disastrous results of modern franchises is far more interesting and entertaining than anything in the movies and shows themselves.

Now that the fandoms, including those who enjoy the new chapters of beloved franchises, hate them, or are somewhere in between, have seen the process play out several times in the past five or six years, I believe most of the process can be easily understood, with a few points that are a complete mystery (at least to me).

So whether it's Star Wars, Ghostbusters, Star Trek, Marvel, DC, He-Man, Terminator, or whatever else it may be, here is the way it plays out from what I've seen:

And a quick but sincere caveat here - if you like any of these properties' new iterations or more modern chapters, more power to you. I have no issue with anyone liking what they like. Life is short! Enjoy! - and feel free to skip this Newspost if you don't want the cynicism.

1. A studio or some kind of corporate entity wants to make money.

2. They realize they own - or could purchase - a beloved entertainment product that
has a dedicated fanbase and was very successful.

3. To minimize the risk and maximize the likely profit, resurrecting, updating, or
sequel-izing this recognizable brand. The thinking is that the old fans
will be thrilled and come to see it, and a whole new group of other fans could be
introduced to it as well.

4. Announce the return of the beloved thing, say it's “for the fans”, and get to work
producing it!

5. Somehow, at this point, something goes wrong. This is the big question mark. What
happens in these executives' offices and writer's rooms? Somehow, it goes off track.

6. Produce and release the new thing, but not before early leaks and interviews have
revealed to the most interested audiences that the thing is
DIFFERENT now. The announcement from #4, that this is “for the fans” is now
forgotten.

7. Battle with fans via the Internet and media. The outrage and backlash from fans who
feel betrayed are met with accusations of ‘sexist, racist and toxic’ fandoms. This
is egged on by media who are either in the pocket of the studios, or want to curry
favor, and also by fan pundits who are making careers channeling the anger of fans
into videos. Because of the nature of the Internet and modern online culture, the
arguments are extreme and possibly blown out of proportion in one way or another.

8. The Thing, the thing that was supposed to be a sure thing, is disappointing in
its returns.

This basic process has been repeated multiple times now, and there have been many guesses as to
how and why this is happening. I'm not totally sure myself, though I follow it all with great interest.

For at least some of these big, formerly glorious franchises, things are beginning to change, I believe. We'll
see.

I do think, and have been thinking for awhile now, that this time is a HUGE opportunity for independent creators to make their own Things and find an audience. The big properties are being picked clean - and the welllspring of NEW Things….is us!

Have a Good one,

The big problem with reboots is the temptation to fix what isn't broken, they just have to reinvent the wheel. Lucas was guilty of this when he went back to create the "special" editions of the first Star Wars trilogy. Michael Okuda isn't as much for just enhancing ST:TOS with new effects. It really works because the episodes are intact just the effects redone. But reinventing everything in the Abrams Star Trek movies? It went way overboard. First season of Discovery was a bit like that but they pulled it in for second season in the context of the ST universe but why redesign everything in Enterprise and then show the original sequences for Talos? My quibble because ST:Ent and DS9 were totally faithful when showing stuff from the Original Series, but now everything has to be poorly lit (actually understandable considering the displays but still) That's why I've tried to keep the sets and uniforms of the original series while changing the tone to something a bit more adult.

Star Trek has been successful because it reinvents itself with every iteration. It doesn't ask new characters to be like old ones or even follow the same plot formulae. It pulls in old cast members to keep continuity and for the fans quite successfully.Each Star Trek series feels organic to the setting. It doesn't feel like a reboot. (Except the new movies. Since they recast old characters, those feel a bit rebooty, imo.) Tbh, recasting known characters is a sticky issue unless it's a comic book movie or James Bond where it just happens constantly. Changed voice actors for animation has the same issue. The character isn't the same, so don't try to write them the same or too similar. Every time James Bond is reinvented, they keep the smug shallowness of Bond, the nonstop action scenes, the music, but the characters have their own spin. They don't try to be their predecessors.

I think that what happens in 5 is, simply, that the franchise was good say 20 years ago but wouldn't be that good today. For example I loved the Masters of the Universe when I was in primary school, but today I wouldn't watch a show with childish plot so the writers have to change something. I then watch the new show, I don't like it like i did when I was 8, and blame the new writers: I should blame the passing of time instead! Star wars episode 4 was a great innovation in its time but wouldn't be anything special today, but since at the time a lot of people were overawed by it it's difficult for old fans to accept this.

Successful reboot? How about Star Trek: Lower Decks. The Trek a lot of fans have been waiting decades for. Someone did a comparison between the reception of ST: Discovery and STNG and found they were nearly identical. Then the reception for ST:DS9 and again the same. STNG and DS9 are now considered classic series in the franchise. Sometimes this entire process in the long run is just so much hot air.

it is really unfortunate that this is reality. But hey, was there a recent reboot that was successful? ghosbuster afterlife? animaniacs? is that al of it?