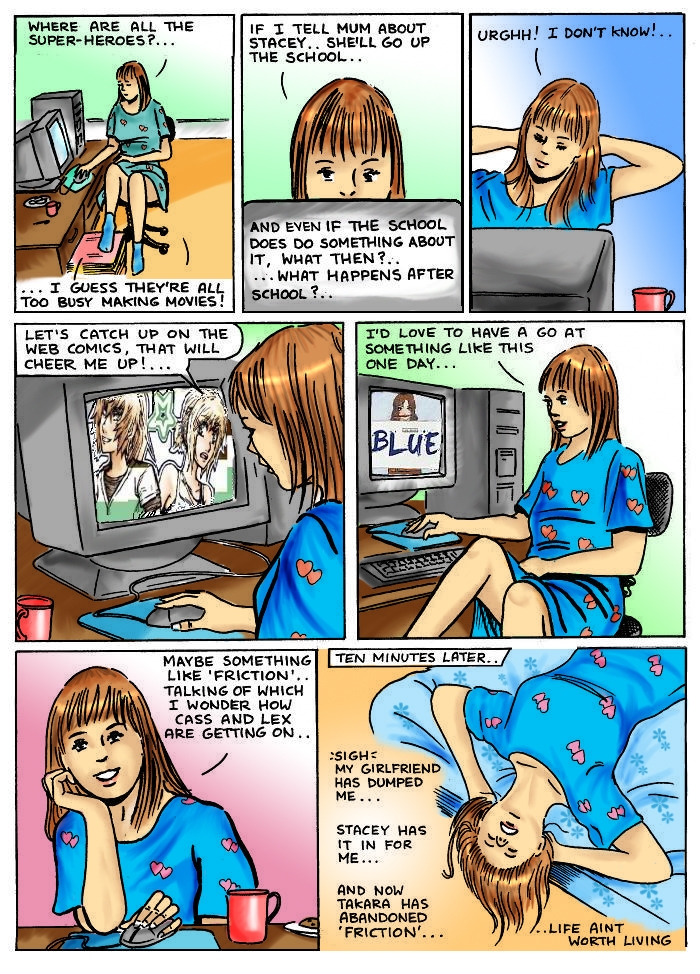 Page 61 - Checking up on the Updates

Good day everyone!
Big news! I am sure you all have noticed that Simply Sarah got featured! How awesome is that! I wish Sky was here to see this. But don't worry she'll be back soon!

Ha ha see life is not worth living unless you have webcomics! ha ha. Sky was very sad to hear that Friction had discontinued for now. It was a good comic.

I shall talk to you later!

That is too funny..."where are all the super heroes at? I guess they're all making movies!" That's awesome.

I must ask - is Sarah a self-insert?

LOL i like the little webcomic skit lol omg one of them died T.T

I agree...when Patricia aka Takara abandonded Friction I felt like life wasn't worth living... I felt so lost and alone once Friction ended so suddenly... :( Cass and Lex would make perfect best friends for Sarah and Janey. Hmmmm.... Maybe Pat would allow Cass and Lex to be a part of Simply Sarah, I know you already did a tribute to them, but I mean like permanently, like they moved into a small house together near Janey and Sarah. Like Cass and Lexi could try and help convince Janey's mom that it isn't a sin!

Janey WHAT!? Where have I been?

Ditto on that last remark. Youre writing is top notch and the illustration fits perfectly. It's a rare combination... and very efferctive.

I just read through all your pages this afternoon and *had* to write to tell you how fantastic you are. And it's not just the artwork. The honesty in the characters and the story are dead on and are a delight to read. I came upon your comic by complete accident, and I'm so happy I did. Keep up the great work!!!

ha ha ha I love where you have the blue comic within your comic.I love blue too.did I make a rhyme.Anyways to have so much trouble in her life she seems oddly happy.she must have a sense of inner quality. 10 outta 10 for me

Ten minutes? She must have the shortest list of favourites on DD! ;-) Love the plugs!

Congrats on the feature.

Great page. Like the plug-ins. And here I thought reading web comics made me feel better and shes getting miserible off of them. Everything I know is a lie!

Hahaha! xDD My god. Sarah, you're truly an amazing writer. Oh gosh. You inspired me to do something for you. I'm gonna make you comic okay hun? :3 Poor Sarah. Things'll get better. They have tooo! I absolutely love you xDD

LOL Frankly when Takara announced that she has stopping Friction I was seriously expecting someone to start writing fan fiction based on it... still am... Congrats on being featured. Totally deserve it.

xD this is so awesome [:

This comic, always one of the best, just goes from strength to strength. I love the reference to Blue, still trying to place the other. And, thirdshaft, long time readers will know that Sarah is indeed a Lesbian Pirates From Outer Space fan (mentioned quite early on in the comic when she and Janey are just getting together.

Wednesday is my favorite day. Trivia at the pub and SS updates. Now if Sweden could just win the football I'd be so very very happy i could cry. And not only featured... TOP 8!!! As totally deserved. Janey, drop round and sort this crap out will you. There's a good girl.

haha,droppin some names lol. its funny all of those are in my faves LMAO. Sad page though...and was that your way of persuadeing 'Friction' to post a new page? lol.